With all the planning and delays, it was a month to the day after our previous event that FRC's landmark 100th event finally took place and even so, it had a shaky start. It seems that some drivers thought that things were scheduled to kick off at 5:00PM when in fact, as the emails sent out to drivers as well as the FRC Forum indicated, this was the estimatd time for the start of the first of the three endurance races planned. Here's what the plan was: Official track opening time would be 1:00PM (the track was duly ready then by the way), with a two hour allowance for practice and sorting as well as for the McLean boys to get the pot going. Driver-pairing qualifying was scheduled to start at 3:00PM followed by a 30-minute practice session for the drivers to get accustomed to the cars they would be driving based on this pairing. This was to be followed by qualifying for the three classes and an estimated first race start time of 5:00PM. Somewhere in between there the food would be ready and things would be sweet.

Well you know what's said about the best laid plans... A final spoke in the wheel which I was probably the last to become aware of was some football match that was being aired on TV which several drivers didn't want to miss, and to add insult to injury, the match went into overtime, then penalty kicks, making it last even longer than initially planned. Fellas, you have to excuse me but I never kicked a ball in school. From age eleven or so, my play/leisure time was taken up just about 100% with all things car racing, including a fascination for a little hobby back then called "Scalextric" or more generically, slot car racing. You can therefore understand my focus on what our month of planning was all about and not the ball sport.

Unfortunately for some others, I was not the only one who knew the FRC plans and did not know about the football (or didn't think it would matter to our event). After some hours of waiting around there was talk of postponing the event and turning the lime into a practice session and although this thankfully didn't happen, some drivers had to leave before all the racing was done as they had not expected it to run so late, so to those, I apologise for you having to cut short your racing.

Having said all that (my obligatory rant), things eventually did get going and turned out to be quite a success. First of all the weather was good with not a drop of rain in sight. To make the 100th event more meaningful, it was decided that it would be an endurance event based on time-limited (rather than lap-limited) races with a total of 100 minutes of racing for cars that would typically run in these type of events. As such, the classes chosen were Vintage Sports - 20 min (10 hrs 40 min at 1/32 scale), Restricted GT and Slot.It Challenge - each 40 min (21 hrs 20 min at 1/32 scale). Our usual endurance rules applied where each car would have at least two drivers, so we used a suggestion by Luke to determine these driver-pairings. This involved having all drivers do a two minute qualifying session with FRC's Porsche Cup cars, then pairing the fastest with the slowest and moving inwards from there.

Prior to the official start of the event, we held a drivers' meeting where we went over the special rules for the day and cleared up any questions that were raised. We also gave competitors a glance at the bundle of medals that would bear recognition of their achievements which were kindly donated by O'Brie's company, OBC Limited. Thanks much O'Brie! We closed the drivers' meeting by paying respect to the recent passing of Granny De Silva at age 100 and Ray's father-in-law David Chase. May they both rest in peace.

The first part of the competition was running of two driver-pairing qualifying sessions, which came up with the following results:

Thus the initial team drivers were:
As the evening wore on and some drivers left, the following new pairings were made for the Slot.It Challenge race:
The cars

Vintage Sports Restricted GT Slot.It Challenge (all Slot.It cars) Once The teams were established, the drivers had a short acclimatising practice session and we went into qualifying for the first class, Vintage Sports. Luke took a quick pole with his Ferrari 250 GTO and we moved right into the race. Each team had or evolved a strategy as the race ran on, and race it was, with no apparent reduction in speed to indicate that it would run for four times the normal race length for the class. Unfortunately for pole sitters Luke and Alex, a breakdown in communications led to a slow down in pace late in the race, ultimately eliminating their chances for a win. The Kyle/Ronald Lola T70 had its own problems. After running well for the first part of the race, it retired after completing just 41 laps. Another victim of attrition was the O'Brie/Kerwin Ferrari 330 P4 which ran fine until suddenly stopping after completing 97 laps. For the top three finishers, the pace was relentless and in the end a mere two laps (about 13 sec) separated first from second and three laps second from third.

Focus then shifted to Restricted GT qualifying which Kyle dominated in his team Aston Martin DBR9. At 40 min, this would be the first of two pretty long races, the longest prior to this at FRC being 30 min at our inaugural endurance event some two and a half years ago. As the race started it was evident that all the races would be run as sprints despite their length. Having run for 132 laps, the Boo/Paul Honda NSX was retired after slowing to a crawl. For the Kyle/Ronald pair it would again end in disappointment when their fast and competitive Aston Martin would stop dead on the track after completing 161 laps, the result of a broken guide lead. The remaining four cars had a very close run to the end, the winner taking the lead with about ten minutes to go and eventually putting five laps on the second-placed car, itself being just two laps ahead of third, with fourth finishing just four laps back.

We had a break for a meal of paratha supplied by Luke (thanks Luke!) along with Boo's excellent geera pork which had been cooking since the first race began (thanks Boo!), Debbie's curried chicken (thanks Debbie!) and of course Luke's two mango chow blends which we had been munching on from early in the afternoon (thanks again Luke!). After this we moved into our final 40-minute race for Slot.It Challenge cars. Steve did a good job of putting his Toyota 88C on pole and led the field from the first lap. Once again the pace was fast and the racing was close, however the two Toyotas of Steve/Kerwin and Gordon/Arden had the edge on the competition and it came right down to the last few minutes before a likely winner was evident. All five starters managed to finish, the Kyle/Ronald pair finally overcoming their reliability demons and running to the end.

Regardless of a few setbacks, everyone agreed that we had a great 100th event. It was nice to have had present some of the quickest drivers from FRC's early days - Nicky, Christian, Shane and Jaf, even if only one of them actually did any racing. Please don't wait so long to come again guys. You know that you're always welcome at FRC. Thanks too for all the marshalling help from everyone, even the non-racers. Without marshals things are never as good (running round and round the table). Finally, a special thank you to Arden who took the time to take some super pictures (and a few movies) of the event's happenings, some of which are shown below.

The races finally finished somewhere around 10:30PM and after packing up everything with the help of Luke and Kerwin, I hit the sack around midnight thinking that, despite all the obstacles and delays, we finally got it done. 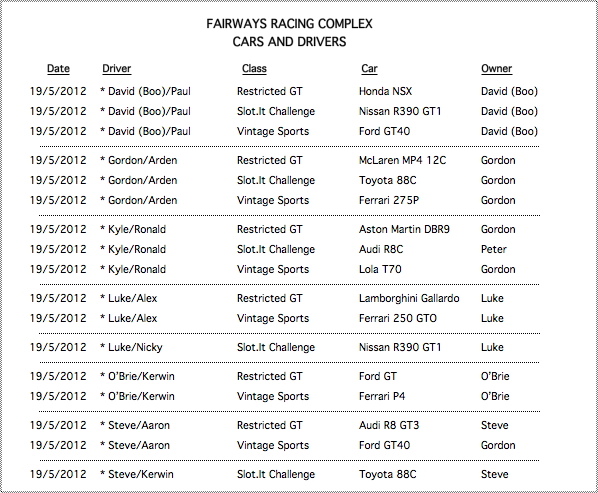 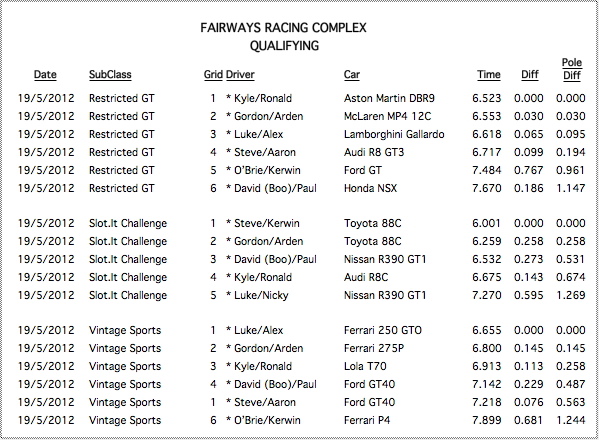 Congratulations to the winners. We'll have the prize-giving at our next event.

Some pics from the event:

This first set are mine: 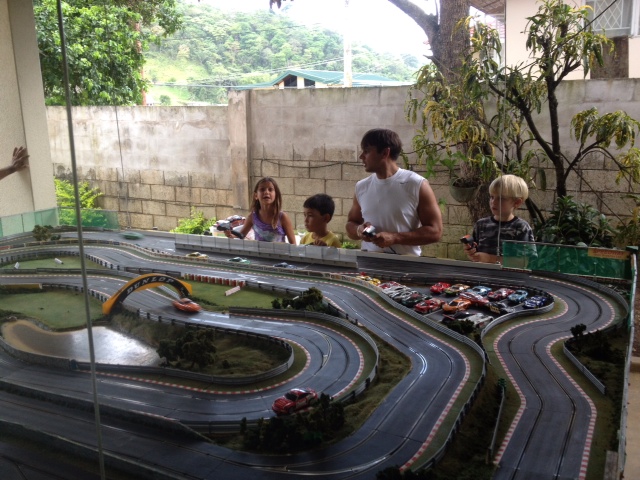 The youths show Shane a thing or two about driving. 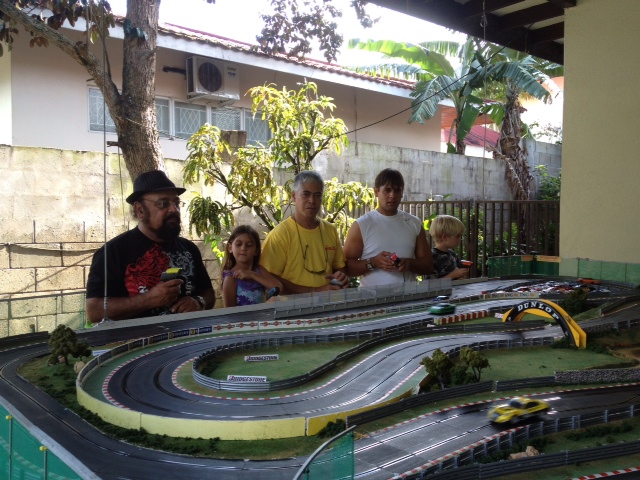 Shane's dad joins Steve, Shane and the kids for some laps. 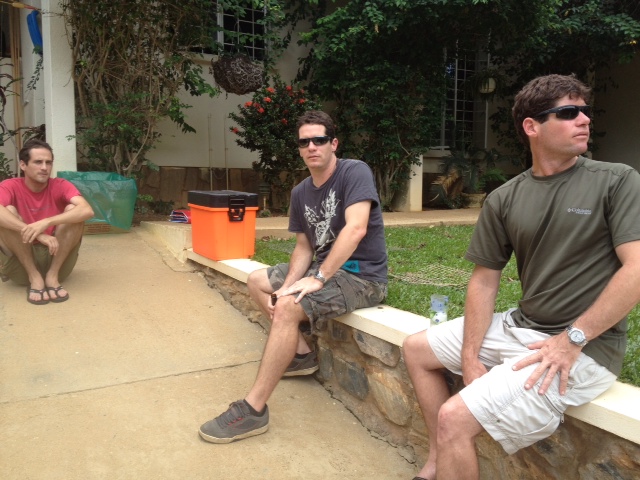 Waiting for the football fans... 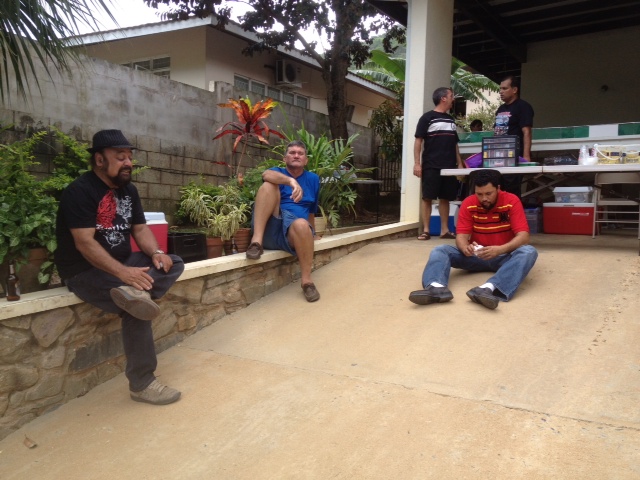 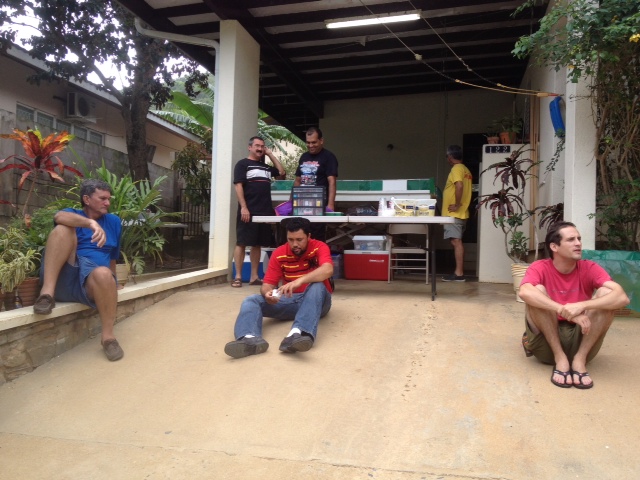 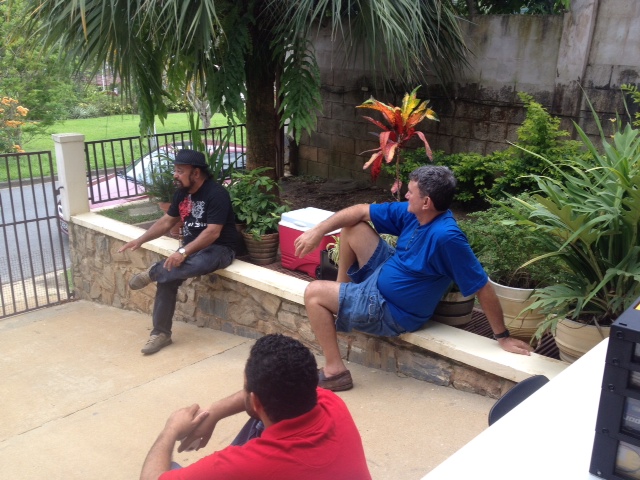 The wait never seems to end...

These of the real action are Arden's: 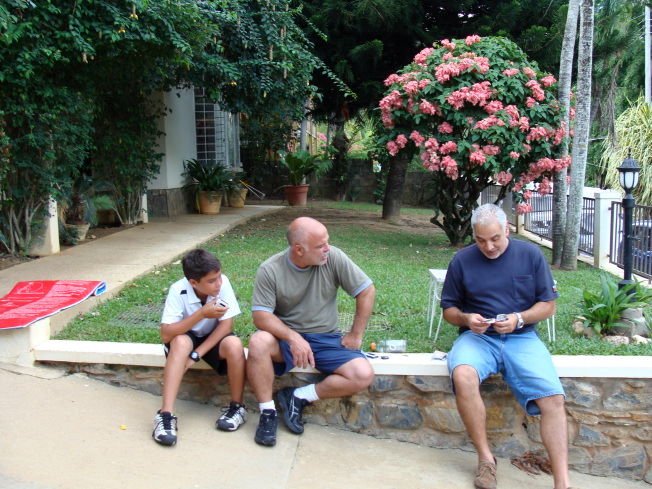 Alex counts the dollars for the food contribution. 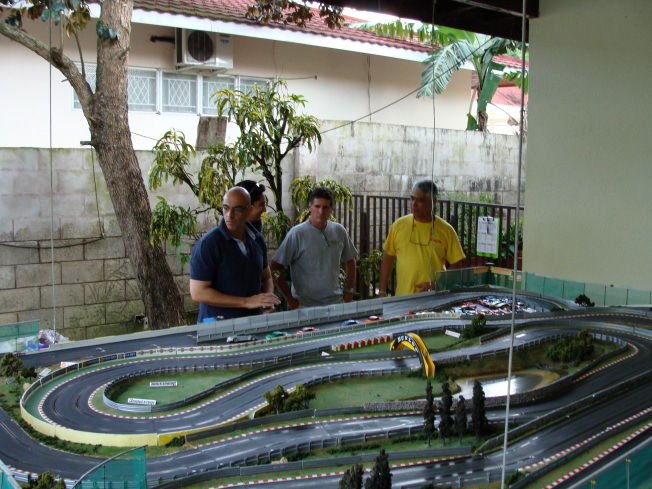 Paul does some early practice runs while Aaron, me and Steve look on. 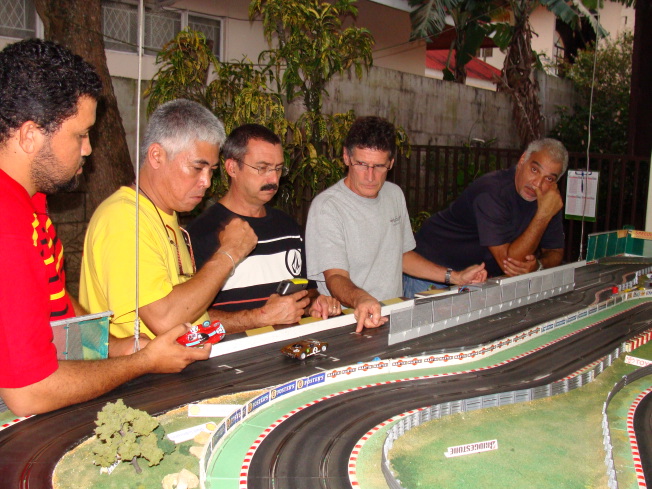 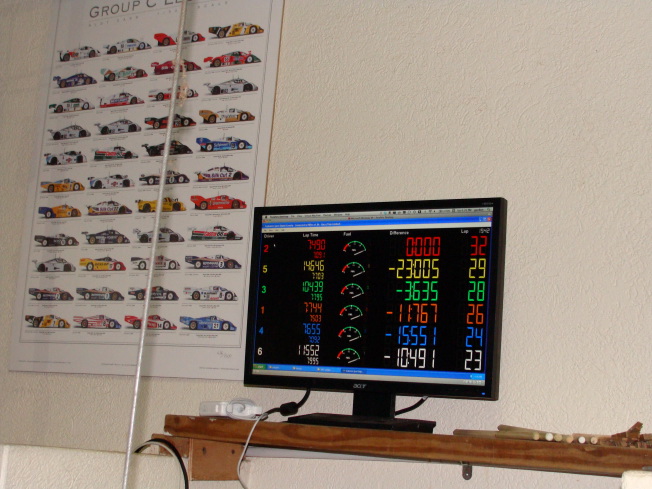 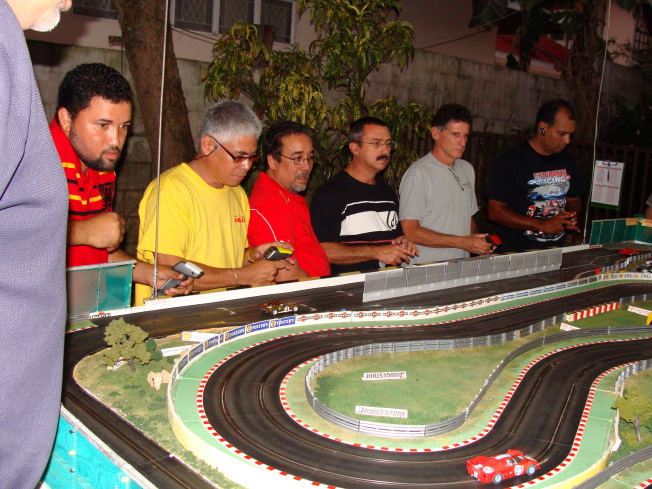 The sun starts to set as Kerwin, Steve, Boo, Ronald, me and Luke concentrate during the 20 minute Vintage Sports race. 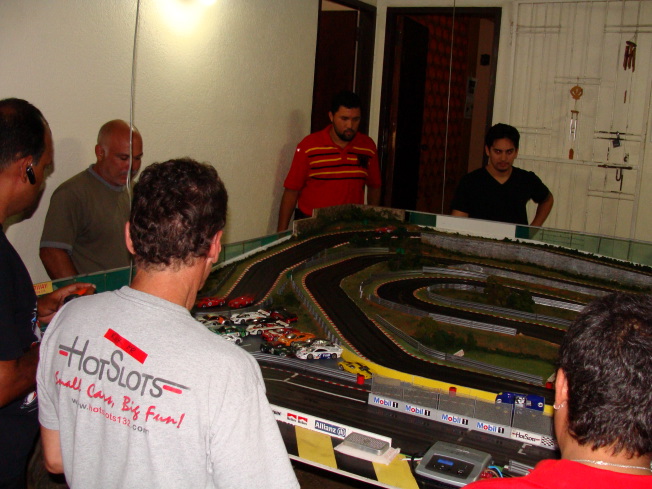 HotSlots - Small Cars, Big Fun - I couldn't have said it better myself. 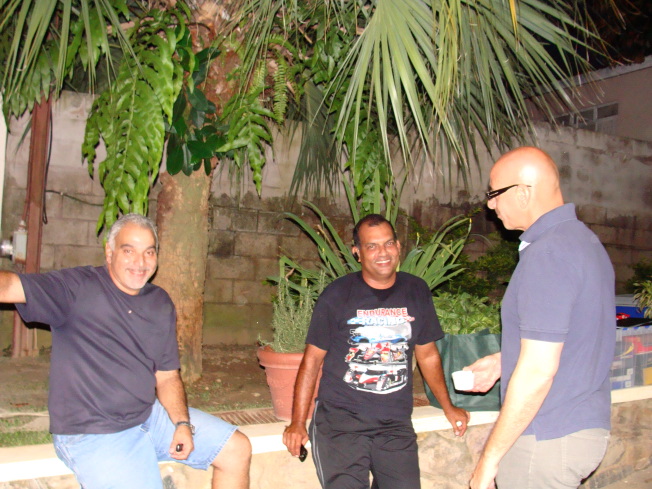 Alex, Luke and Paul have a laugh during a rest period. 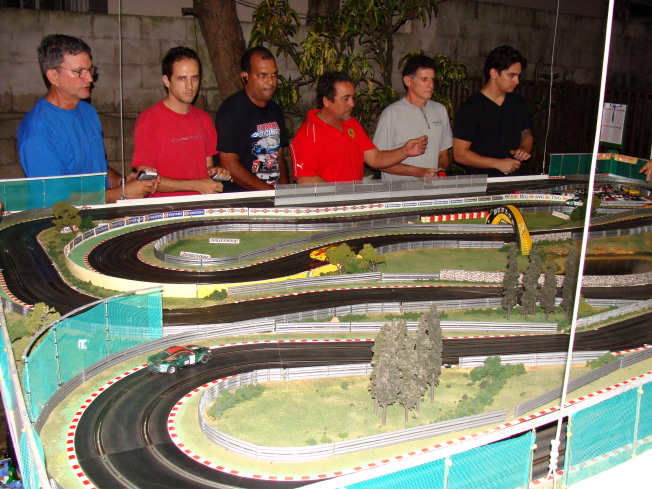 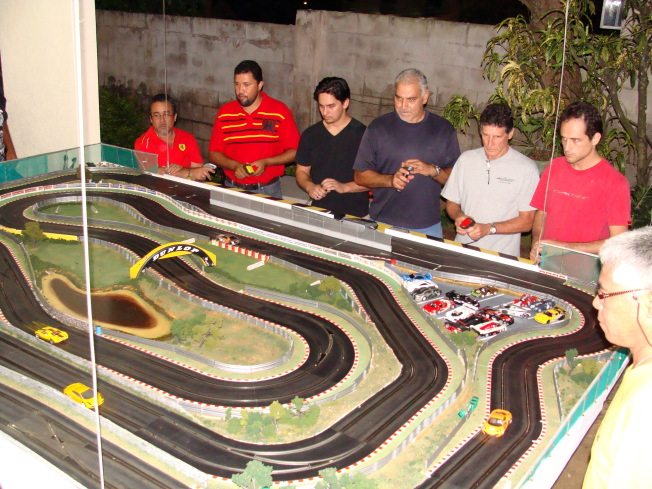 A good view of the track as Boo, Kerwin, Aaron, Alex, me and Kyle focus during the Restricted GT race. 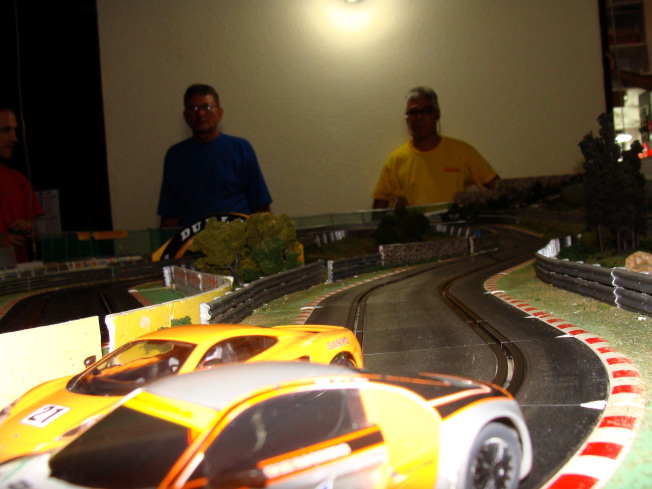 A great shot of a battle between my #21 McLaren MP4 12C and Aaron's Audi R8GT3 in the Restricted GT race. Marshals O'Brie and Steve look on. 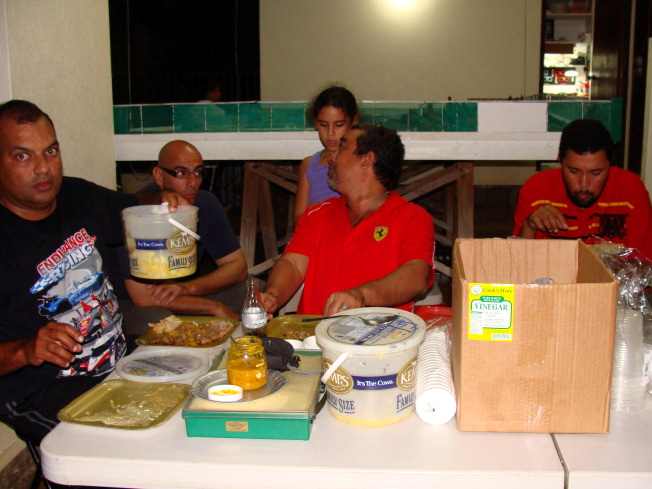 Food time and even little Zoë gets in the action. 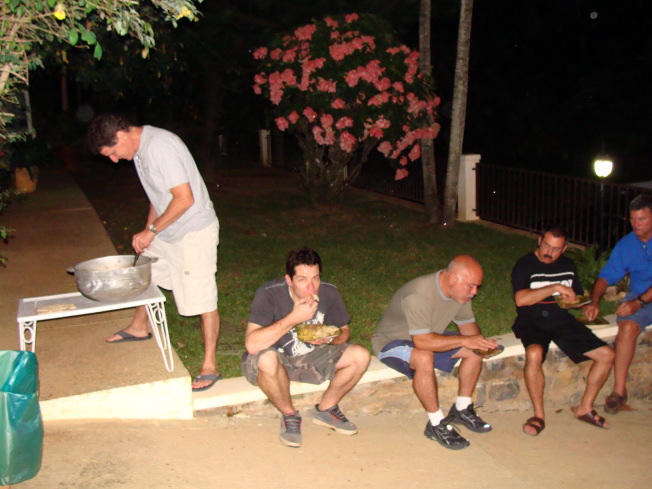 I dig in the pot while Nicky and the rest get into the food. 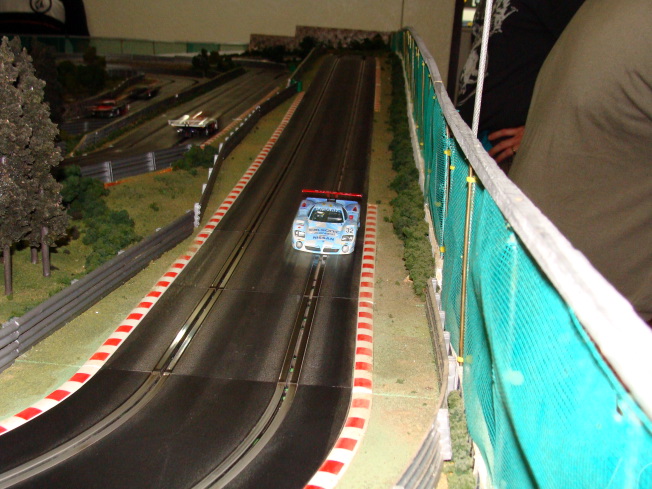 Luke's Nissan R390 GT1 brakes hard at the end of the downhill back straight during the 40 minute Slot.It Challenge race. 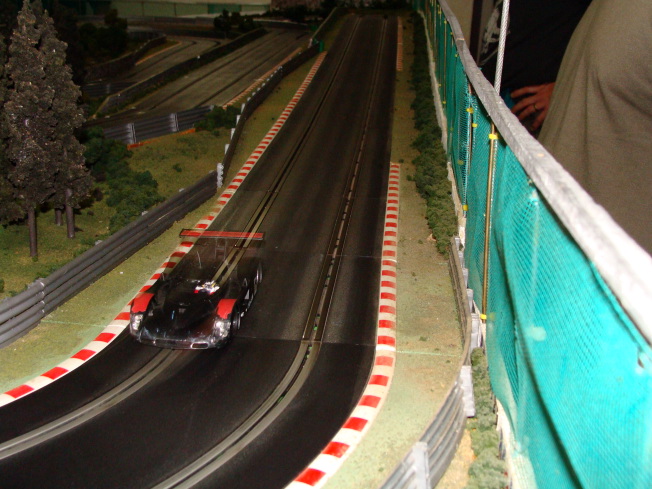 Nicky's Audi R8C is half transparent as it speeds into the Island Hobbies corner. Great shot Arden! 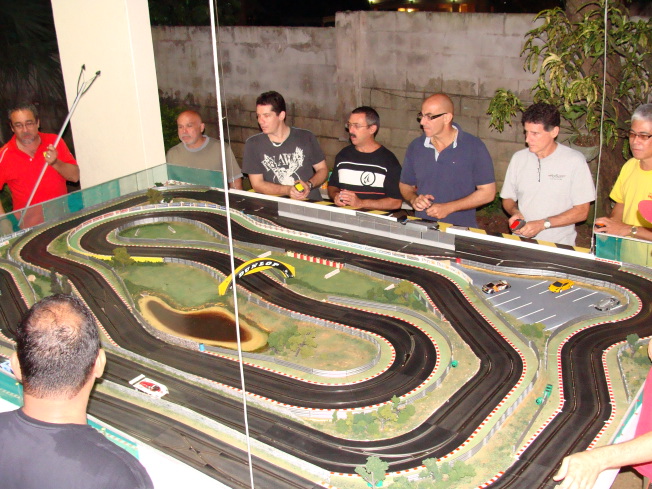 Slot.It Challenge action - Boo readies the grabber as Nicky, Ronald, Paul, me and Steve do battle. 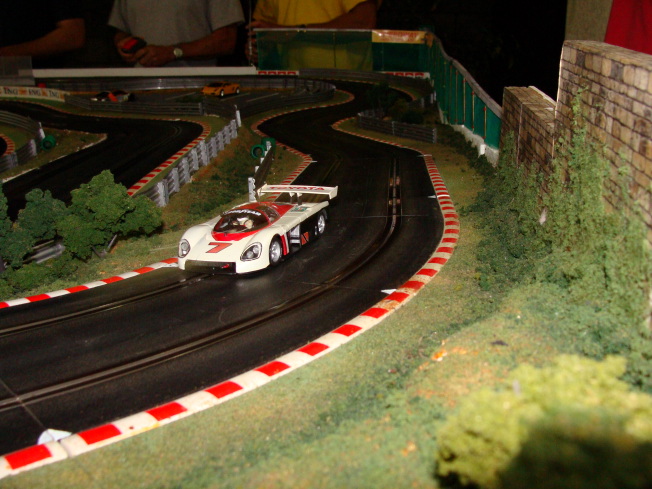 Steve's home-painted Toyota 88C arrives at the right-hander at the top of the hill. Note the Trini flag on its flank. 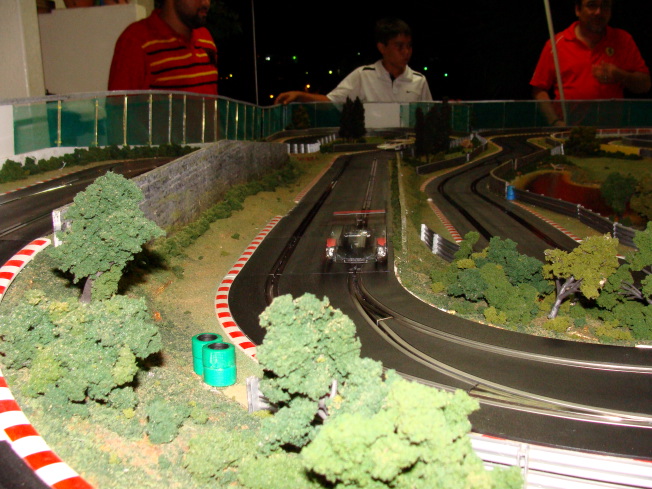 Kyle's Audi R8C about to enter the left-hander in the middle section of FRC. 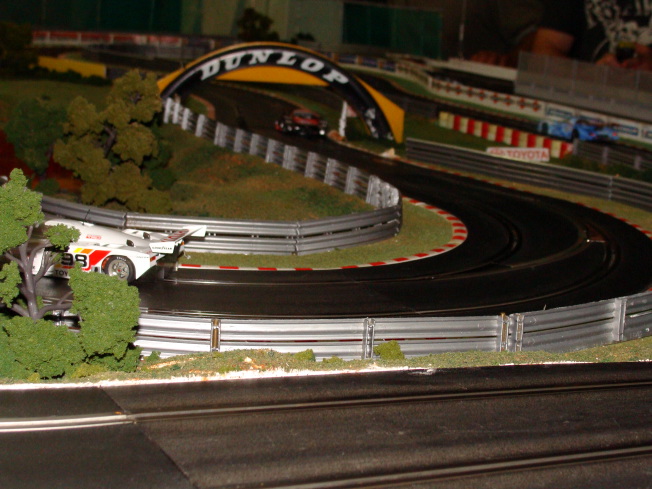 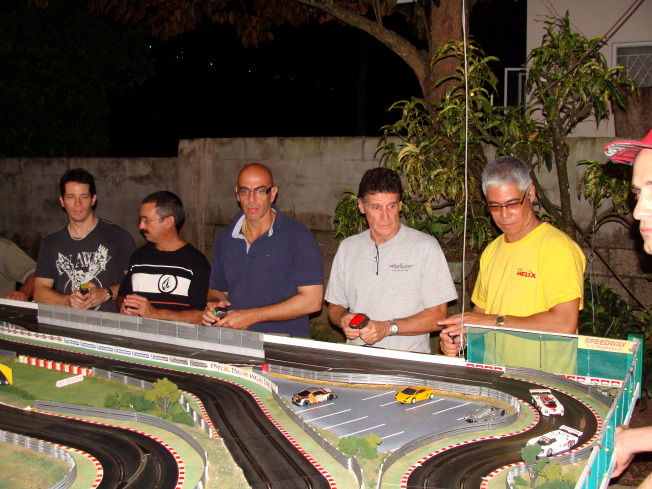 The close battle between the two Toyotas driven by myself and Steve.

ps. Pabs you always telling me how big my eyes are...

BTW - ah know yuh jus like d bac a my hand, so dow com wit no reply dat my eyes always lookin so...

Steve, I love that pic of your Toyota going into the hilltop right-hander.

Incidentally, I have full-size copies of all the pics (including several not posted above) if anyone needs. Thanks so much for this Arden... the pictures are a lasting memory for the future.
Top

Interesting to note that although the Group C (Slot.it Challenge) cars were markedly faster than thr Restricted GT ones, the winning RGT car actually covered more laps in 40 minutes than the winning SiC car !
Top

steveaca wrote:Interesting to note that although the Group C (Slot.it Challenge) cars were markedly faster than thr Restricted GT ones, the winning RGT car actually covered more laps in 40 minutes than the winning SiC car !