We celebrated our 300th FRC official event with a large, appropriately-decorated cake courtesy Luke T, a few dozen shrimp wantons brought by Alex and a 2-litre bottle of Stanley's potent but excellent home-made cider, along with a lot of laughs and camaraderie and, best of all, four classes of exciting racing on the now almost fourteen year old FRC circuit. Turning up and joining me to be part of it were Steve, O'Brie, Luke, Alex, Keith and Spick (Nicholas E). My two little granddaughters Maddie and Ally were also present for the occasion.

Scheduled classes were Kitbash, American Pony Car, Scalectric BTCC, Slot.It Challenge and Ferrari Challenge IROC and we had full six-car grids for KB and BTCC, five cars for SC and four for APC, all filled with excitement and a fair amount of side-swipe contact!

Unfortunately the track/powerbase started acting up as soon as we switched on the power, so we replaced the powerbase with O'Brie's identically-modified (but never used at FRC) one which solved the problem until the same issue recurred in the third and fourth races. We still were able to work out the final placings in these races, but we were unable to run the IROC races. The problem is not likely to be coming from the powerbase since O'Brie's showed the same symptom where the outside lane started registering as throttle 1 no matter which controller/car was used, whilst the inside lane registered everything correctly. We now need to look at the lane changers and anything else which may be causing this problem. The track is getting old like me!

Thanks for the cider Stan! 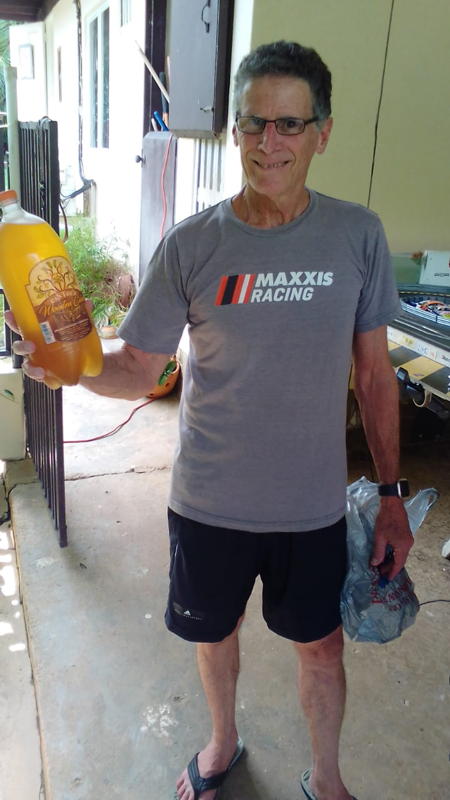 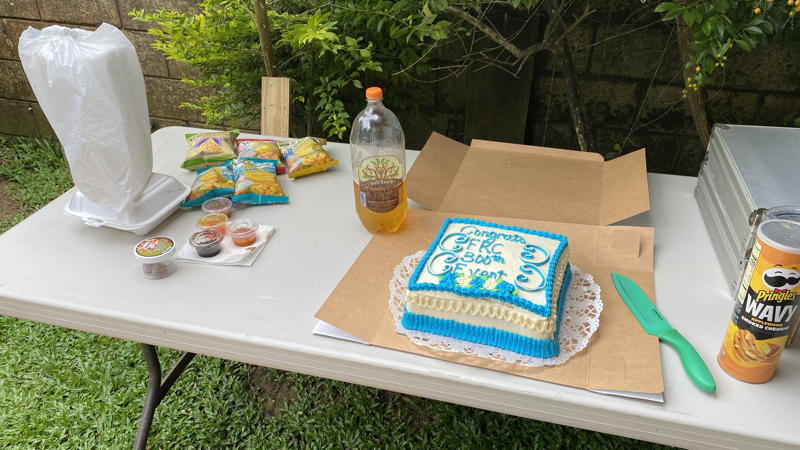 Keith, Alex and O'Brie relaxing and chatting before the racing began: 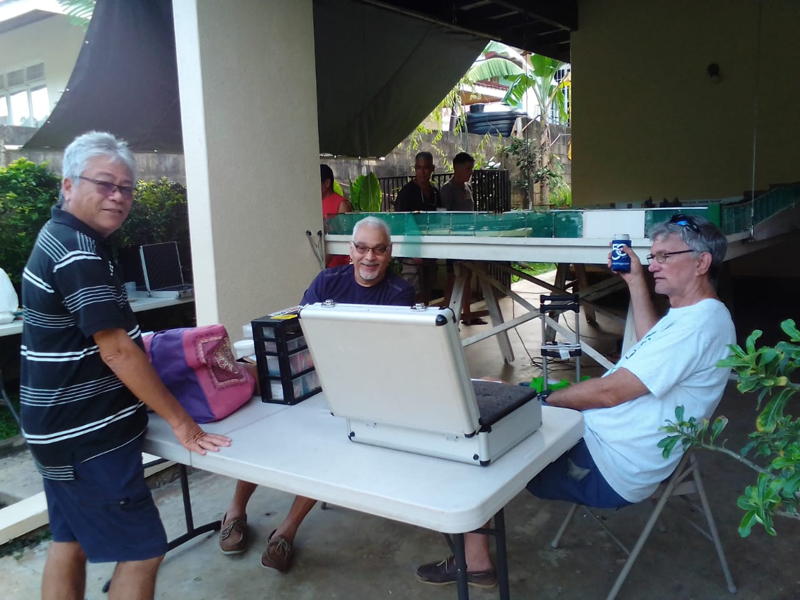 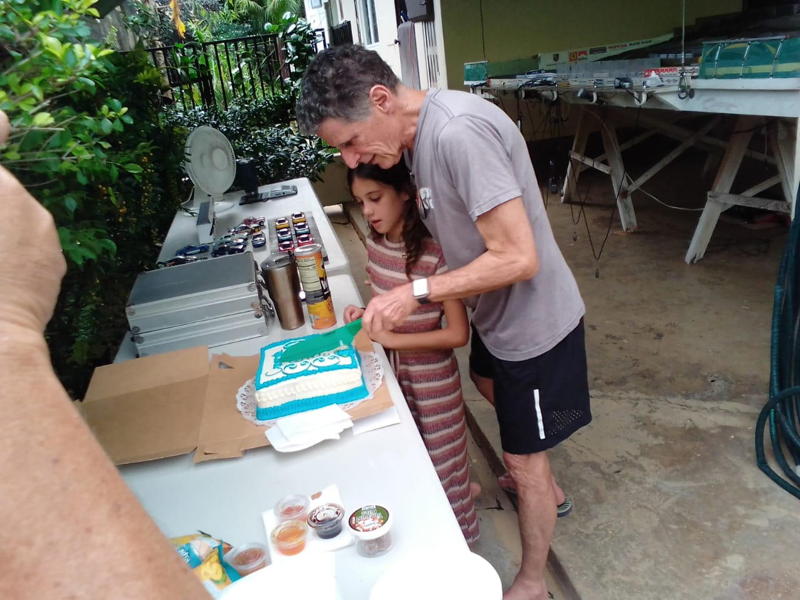 The guys trying out Stan's cider: 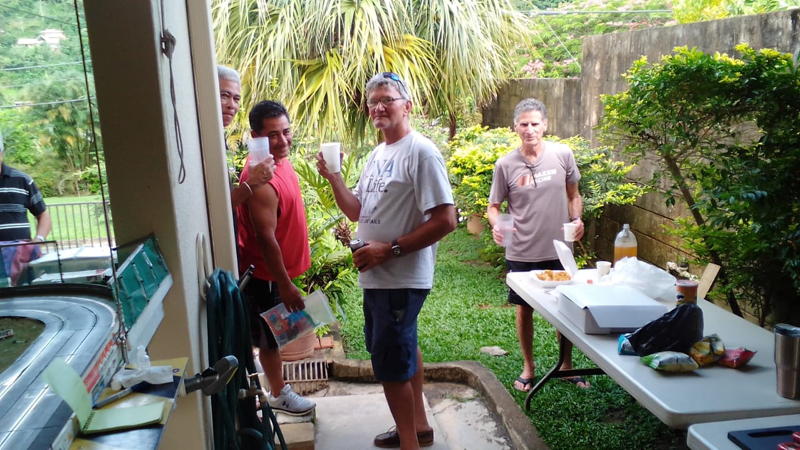 We even had a rainbow joining in the celebration: 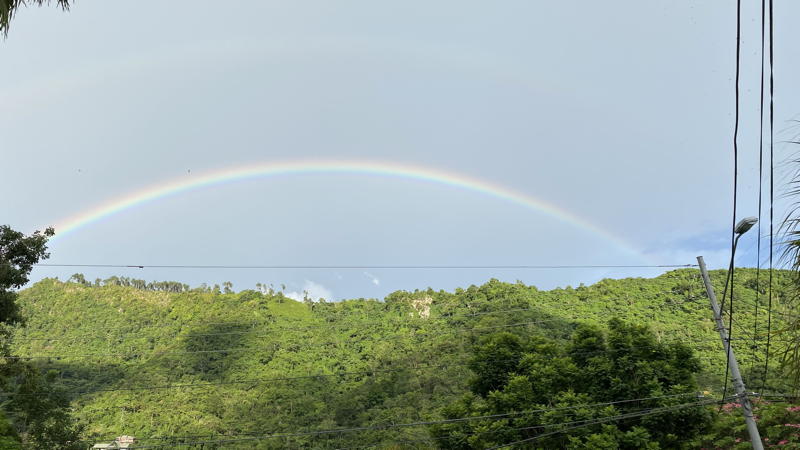 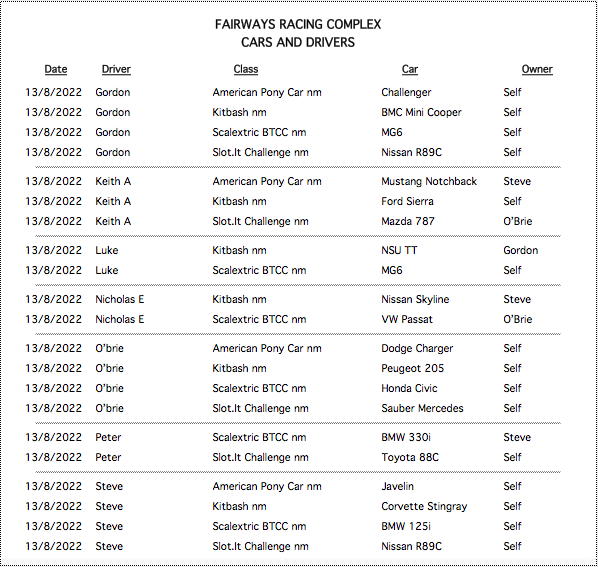 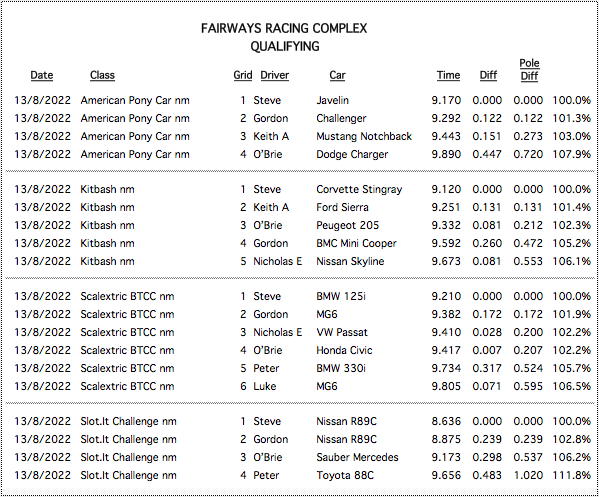 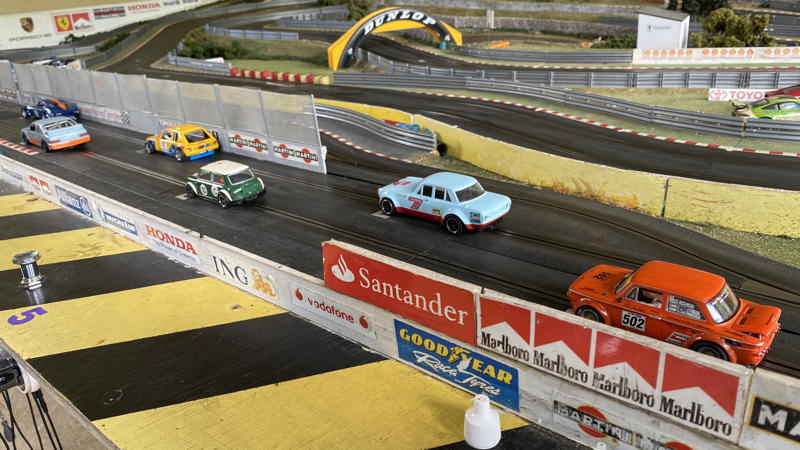 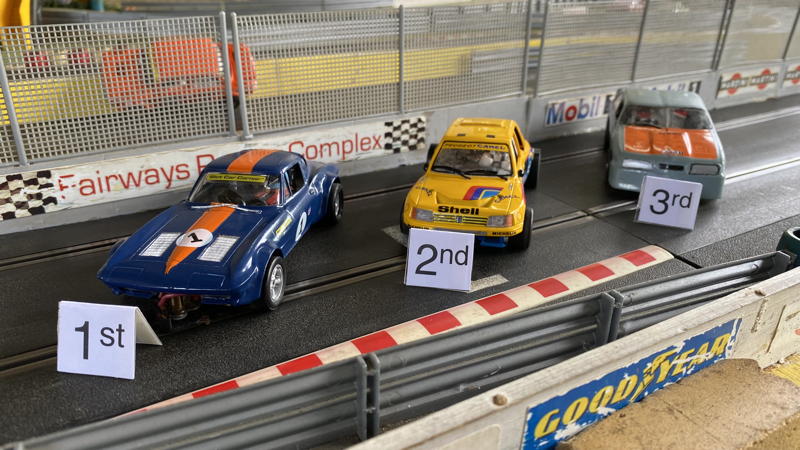 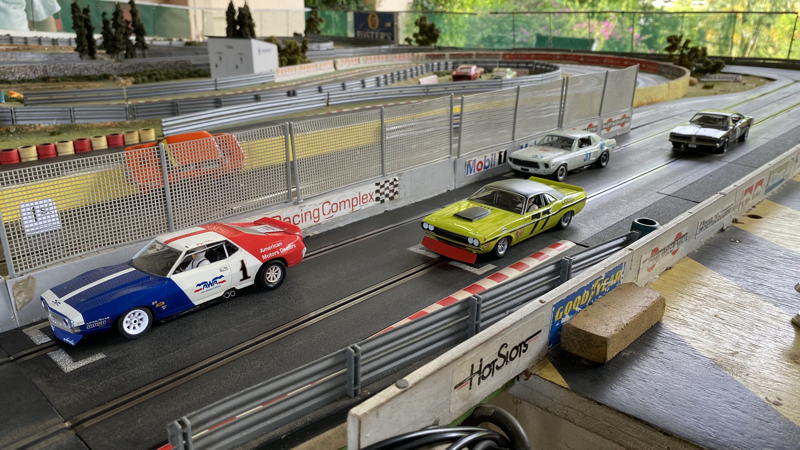 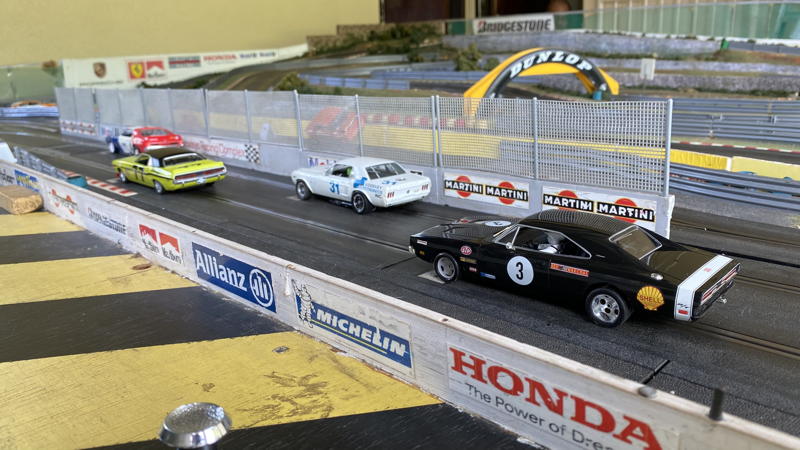 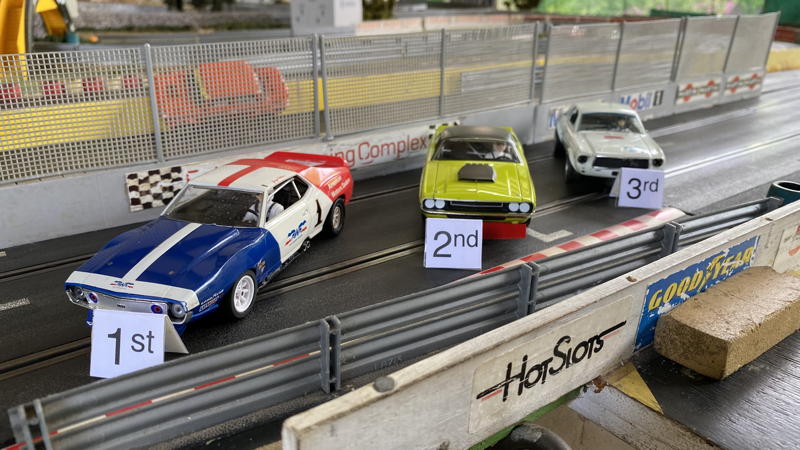 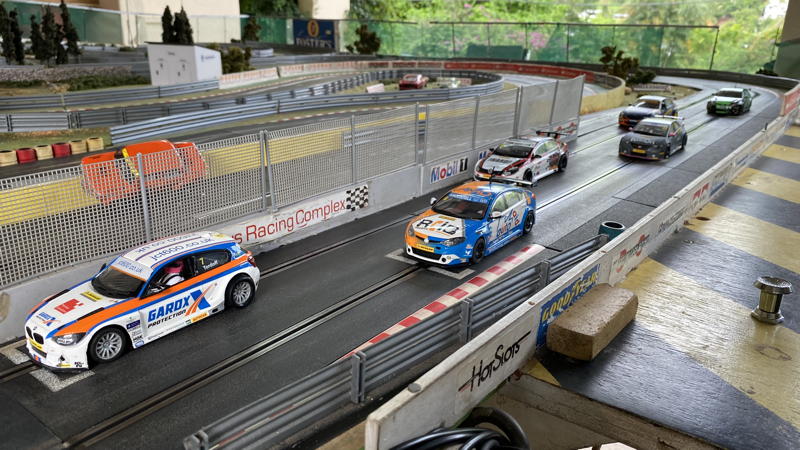 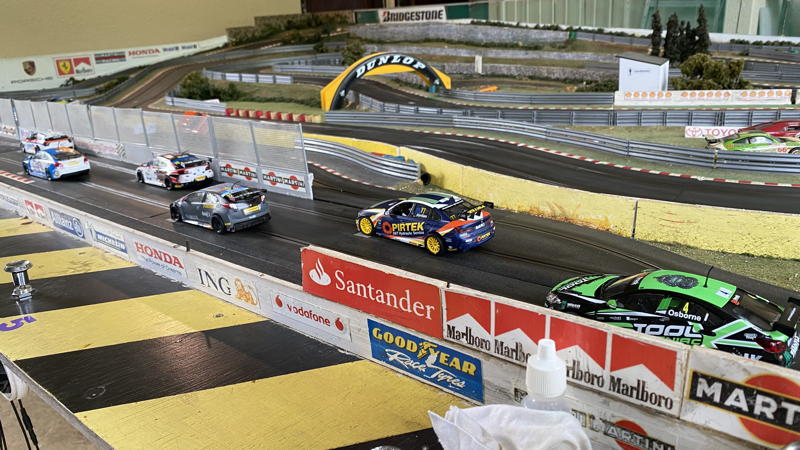 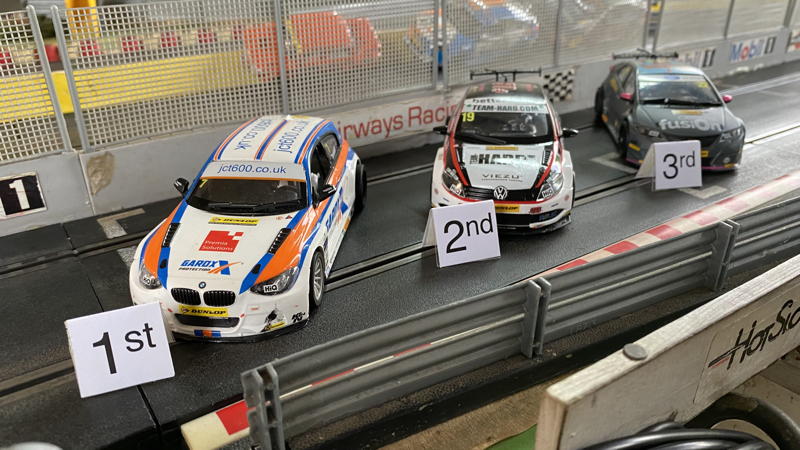 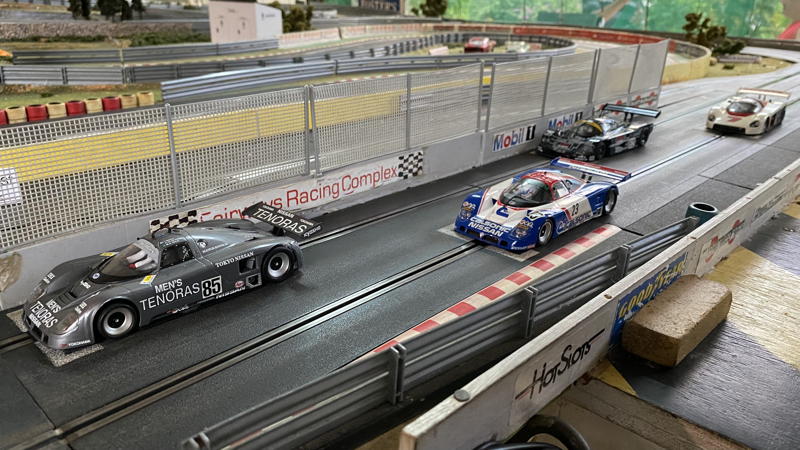 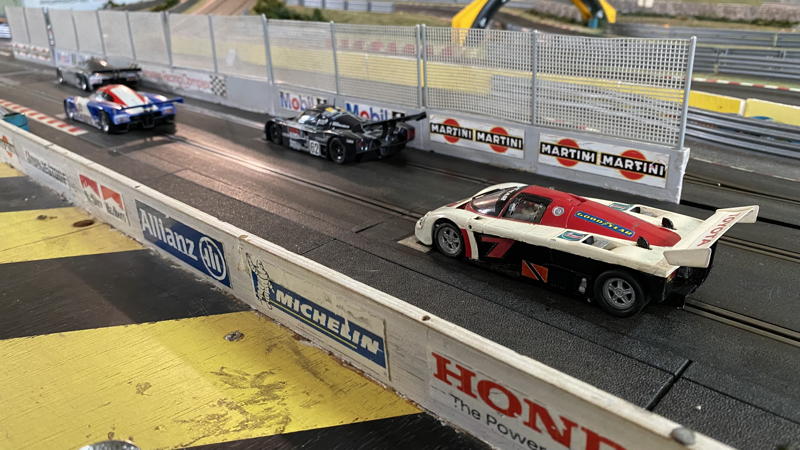 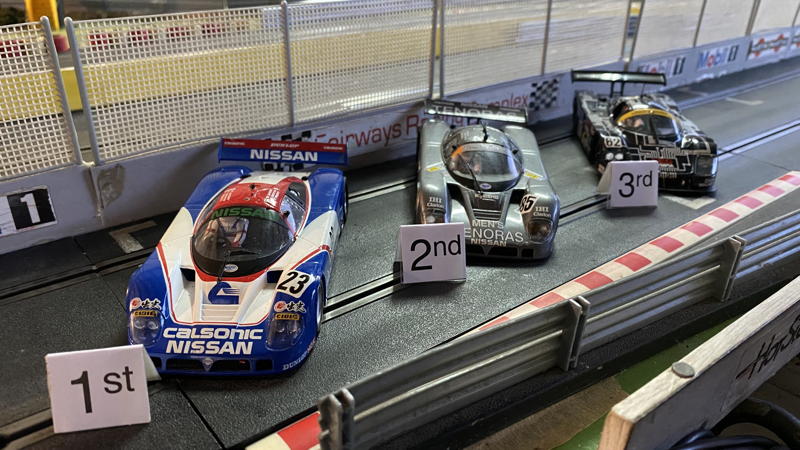 Granddaughters Ally and Maddie having their turn after the official races: 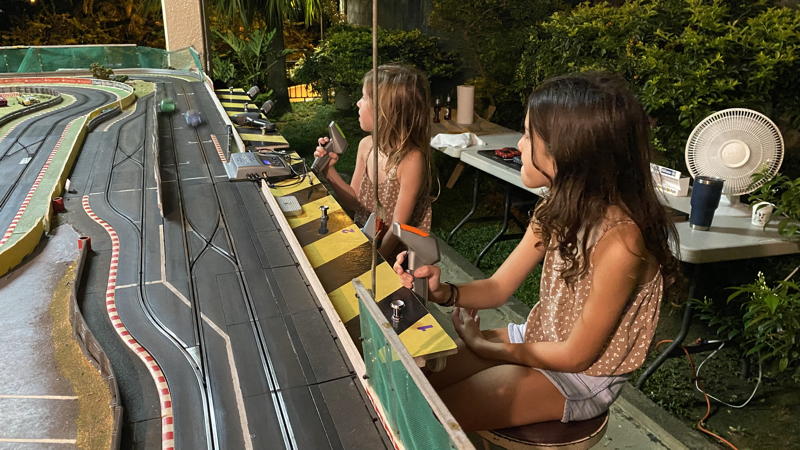 Great afternoon as usual of racing at FRC. It was a special event, made even more special with a good driver turnout and treats provided by Luke (cake), Alex (wontons) and Stan (cider). The four classes raced proved to be extremely entertaining...as expected. Was nice to see O'Brie's Charger actually being raced. Another treat was seeing Gordon's neat little Lotus which looks like a very good runner. Too bad the ??? acted up later in the day, putting an end to thoughts of running the IROC class.
Congrats to Gordon on winning the Slot.it Challenge class and to Luke on taking Index Of Performance honours.
Looking forward to the next event !
Steve
Top

Congrats to Gordon on winning the Slot.it Challenge class and to Luke on taking Index Of Performance honours.

And congrats to you Steve for winning everything else!
Top

That said - how about lining up the number 4, 5 & 6 finishing cars behind the fence of the pitlane area ..?

Last place driver may not feel too thrilled!

The podium is really to highlight those who bested the rest, so perhaps we should leave it for that.
Top

gordon wrote: ↑Tue Aug 16, 2022 9:22 pm The podium is really to highlight those who bested the rest, so perhaps we should leave it for that.