We had a small turnout of O'Brie, Steve and Nicholas E ("Spick") joining me at FRC yesterday, but this didn't in any way tarnish the event, as we raced five classes in a very competitive afternoon of close racing action. Although Ferrari Challenge IROC cars were not raced, there was some really enjoyable action amongst the classes run. It was great to see Spick bring along a ton-load of cars to test so that he knows which ones to focus on for the next event.

Once we have no track issues, the competitive yet very friendly atmosphere is always a lot of fun and a great stress reliever. This event was just that!

Before packing up, my two granddaughters took a pair of IROC Porsche Cup cars for some sibling competition which was a nice way to close off the evening. 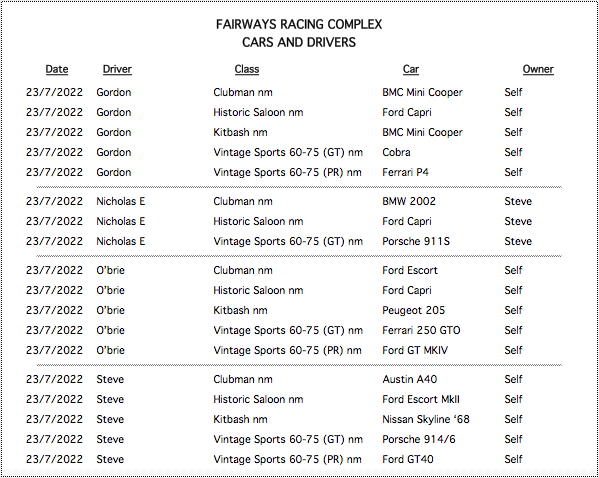 Please note that the qualifying times shown for Vintage Sports Prototype are actually the fastest race times because I had mistakenly closed the quali times window before recording them. 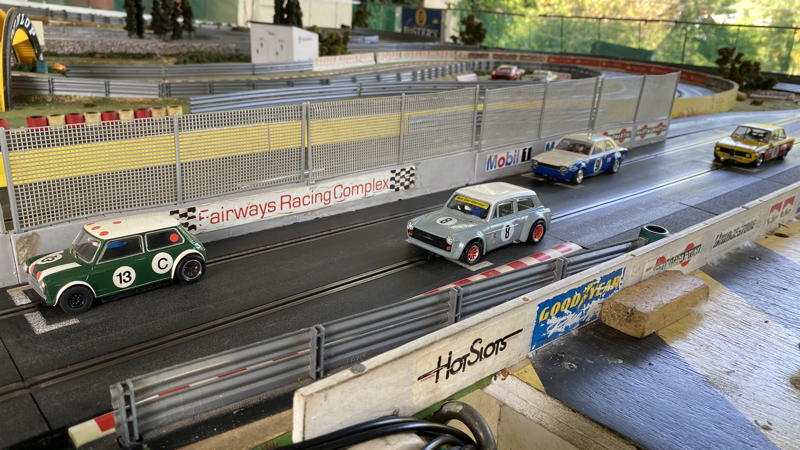 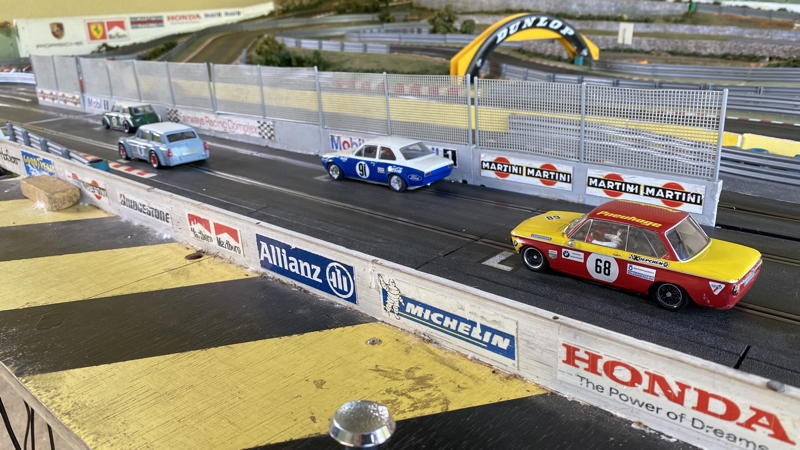 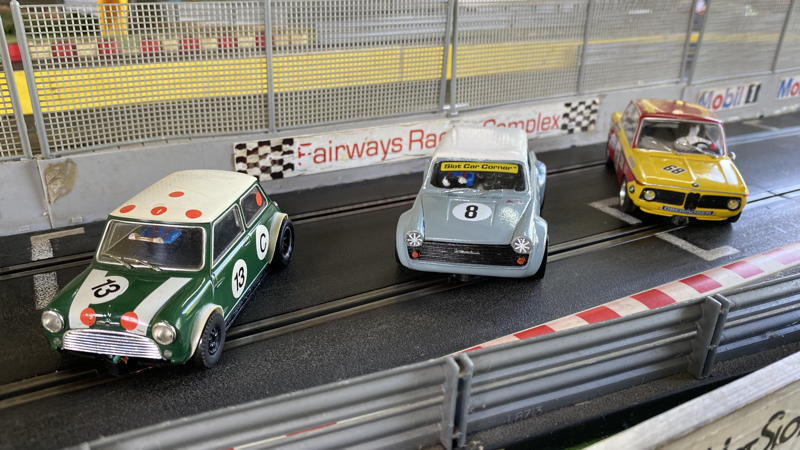 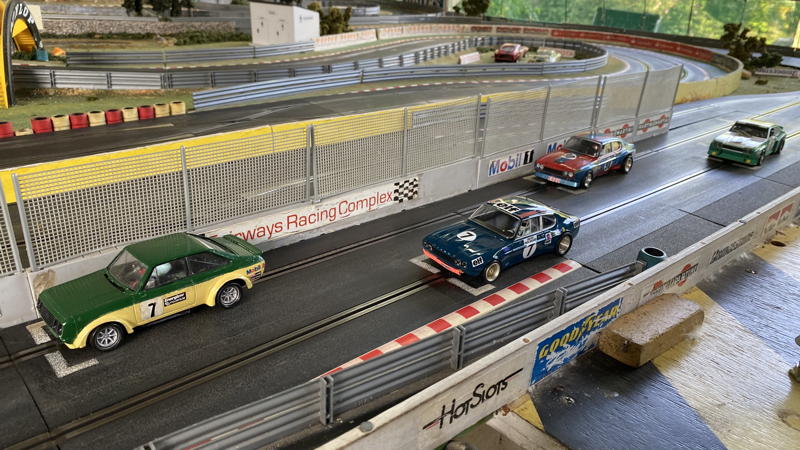 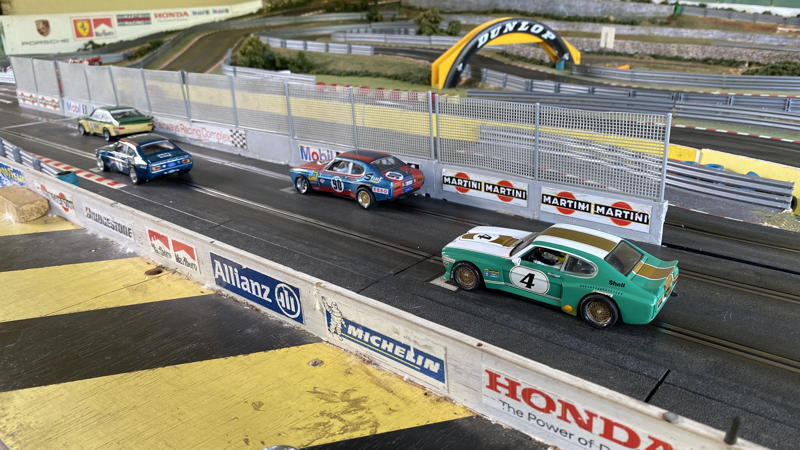 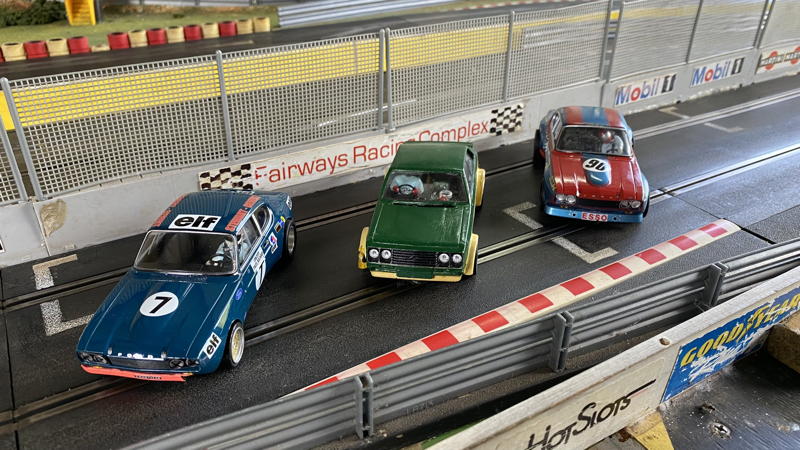 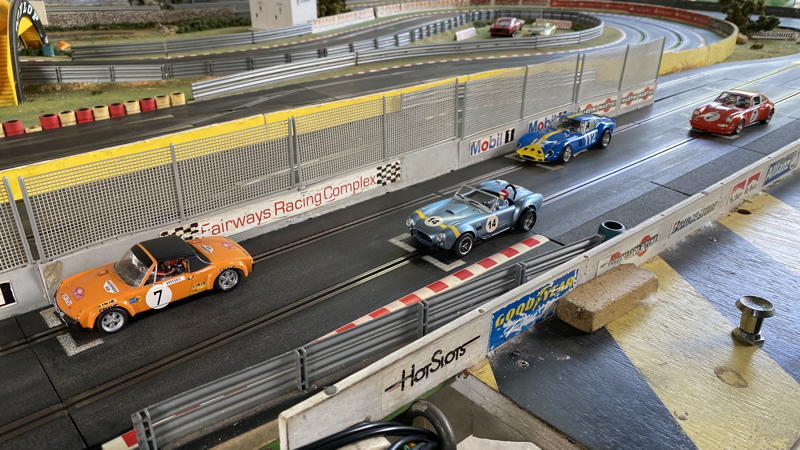 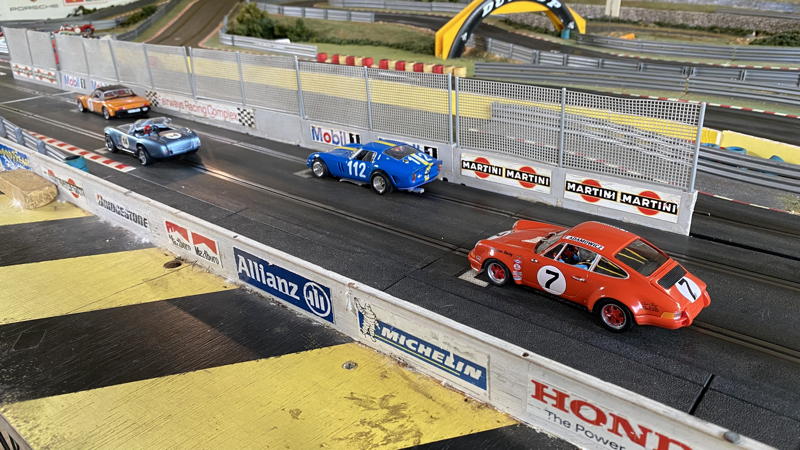 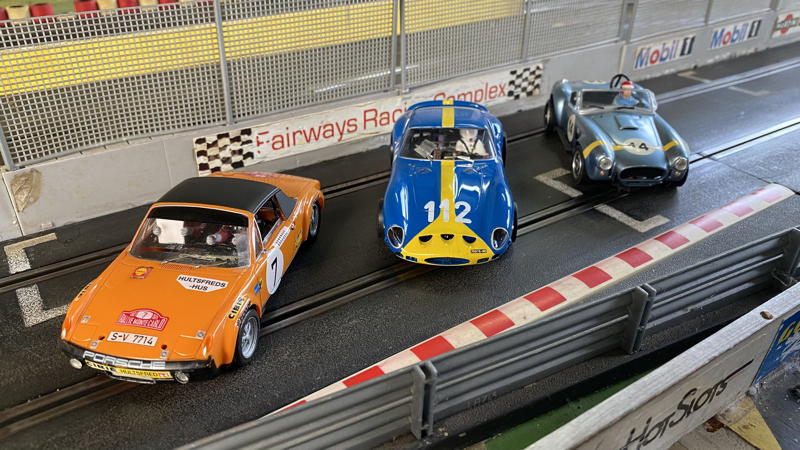 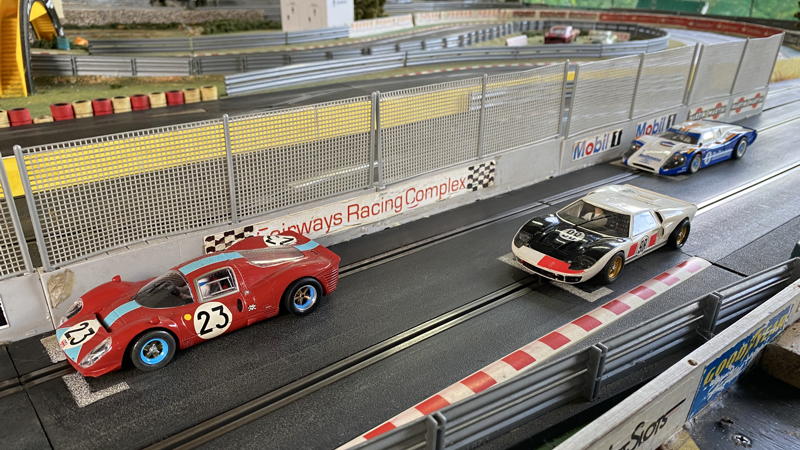 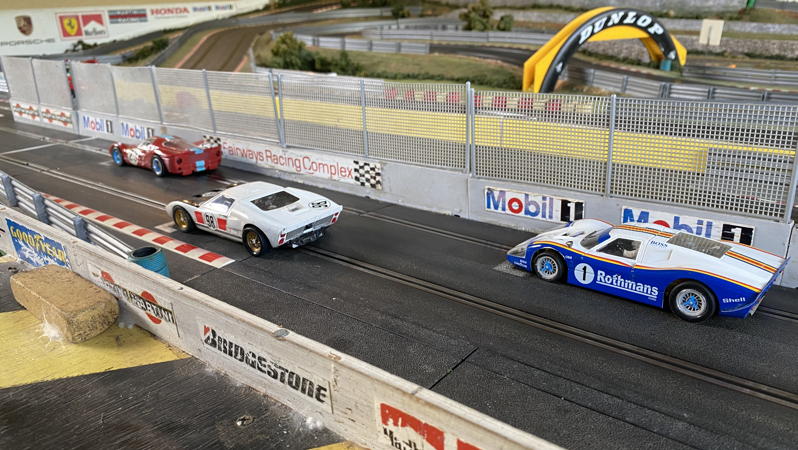 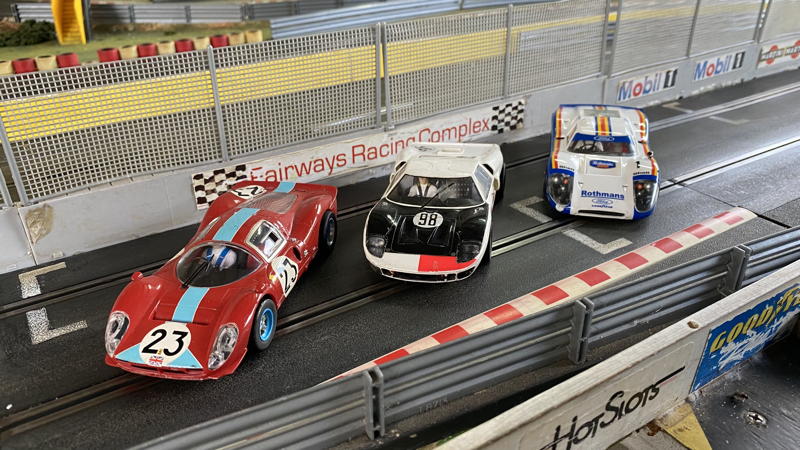 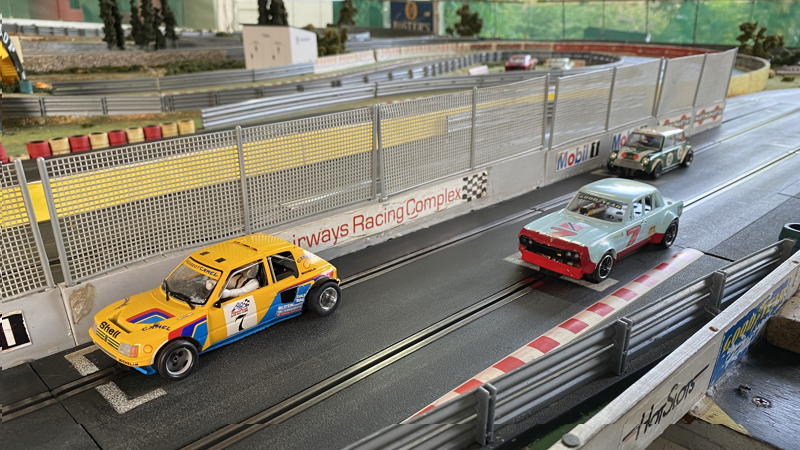 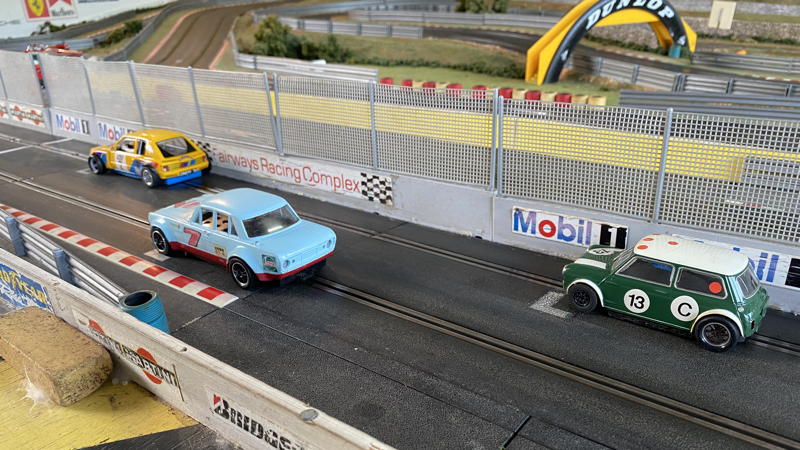 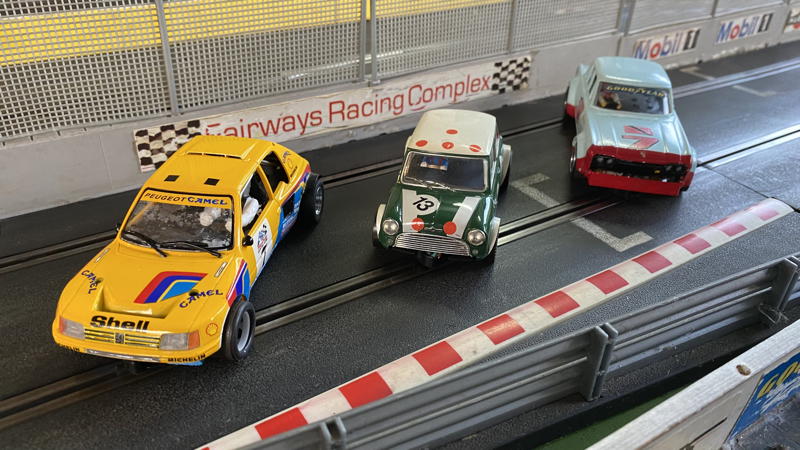 Great looking selection of slot-cars ...
All nicely displayed in their 5 respective classes

Great day of racing as usual at FRC despite the smallish turnout. Nick originally planned to come and race but then had a change of plan and said he couldn't race but was just coming to try out some cars to test if chips were in order ....and what a number of cars he had ! My favourite was the Alfa Romeo Giulia which previously was front-motored but is now sporting a new chassis with a different layout. I believe this car has great potential. Nick ended up staying and actually raced the majority of races. My A40 made its racing debut in Clubman class and performed decently but couldn't keep up with Gordon's very impressive Mini. O'Brie's Escort finally seemed to have overcome its previous issues (chip related I believe) and also ran well. My BMW 2002 also performed well in Nick's hands. The Historic Saloon class was raced for the first time in non-mag configuration and very much fun it was. My Escort RS2000 was the only non Capri ! Vintage Sports GT and Vintage Sports Prototype were as hotly contested as ever. In VS GT, the latest tweaks to my 914/6 seemed to have borne fruit . In VS Prototype, Gordon's Ferrari P4 remains head of the class. The Kitbash race was a non-scheduled one and here O'Brie's Peugeot 205 was untouchable.
Congrats to Gordon for winning Clubman, Historic Saloon and Vintage Sport Prototype , O'Brie for winning Kitbash.
Congrats also to Gordon for winning the event overall and to Gordon and O'Brie to jointly taking the Index Of Performance award.
Looking forward to the next event !
Top

I enjoyed looking at the pics and reading the results and comments , i am always happy to see our sport grow with now non magnetic tuning. keep up the good work .
Top

Great fun!! Thanks guys for another great race evening. Looking forward to the next for sure