Well, what an afternoon/evening of racing we had at our 298th event! One of the earliest guys to arrive was Kent, who took some laps in one or two of the Ferraris but unfortunately had to leave early to prepare for house guests, so did not race. The big surprise though was the return of Boo, an FRC veteran who has been competing at FRC since March 2009, having taken part in 672 races/rallys and whose last previous appearance was in April 2018, over four years ago. He did well too, considering that it was his first no-magnet experience.

We managed to run one race each for Slot.It Challenge, LMP and F1 before moving on to the Ferrari Challenge IROC races. Because we had seven drivers in attendance, we ran seven races to allow each driver six races, one with each car. This of course makes it a very fair competition. You'll notice that both Slot.It Challenge and LMP had a GT car in their races. This was to give Warren - Mr. Enthusiastic - an opportunity to race his own car. In any case, GT cars do race with LMP cars at endurance races, so it wasn't really out of place.

In the results below you'll see that for each race, the fastest lap time is now highlighted in orange and we now have a new IROC report showing the lap times by car/throttle, fastest to slowest.

We were enjoying the racing so much, we didn't immediately realise that it was already 7:30pm when we finished the final IROC race before sitting down to chat and hit the watering hole for the usual after-racing "ole talk". 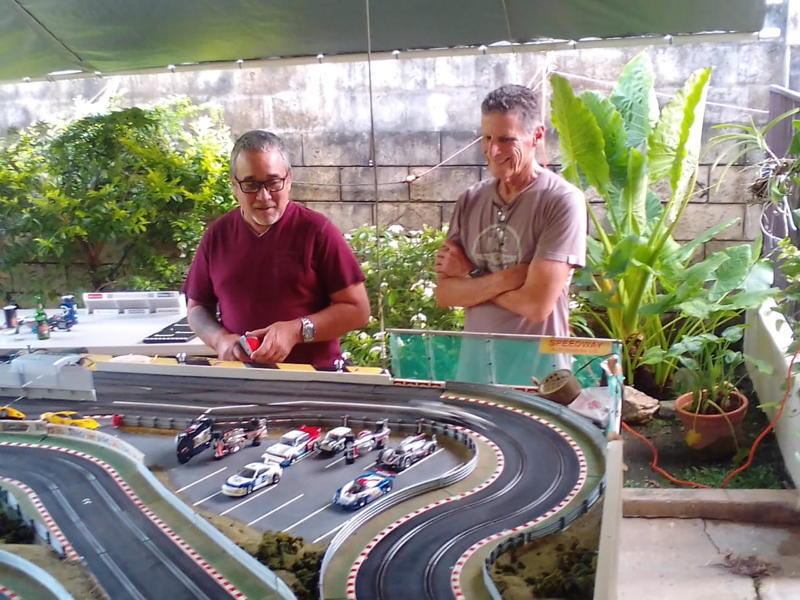 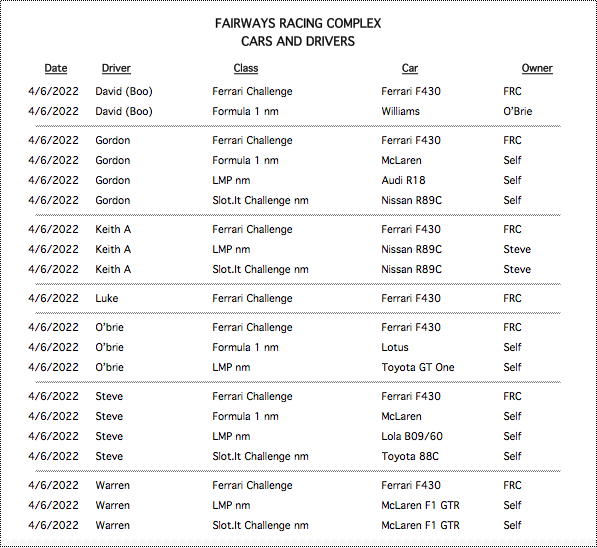 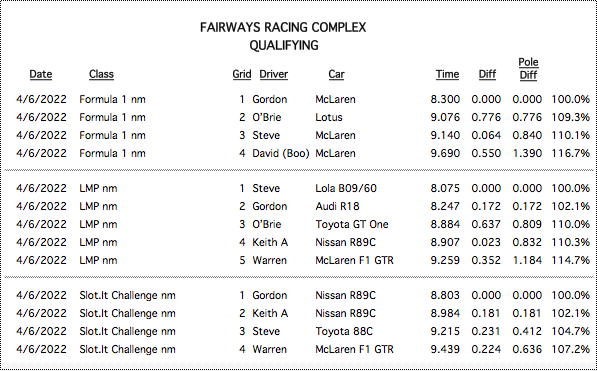 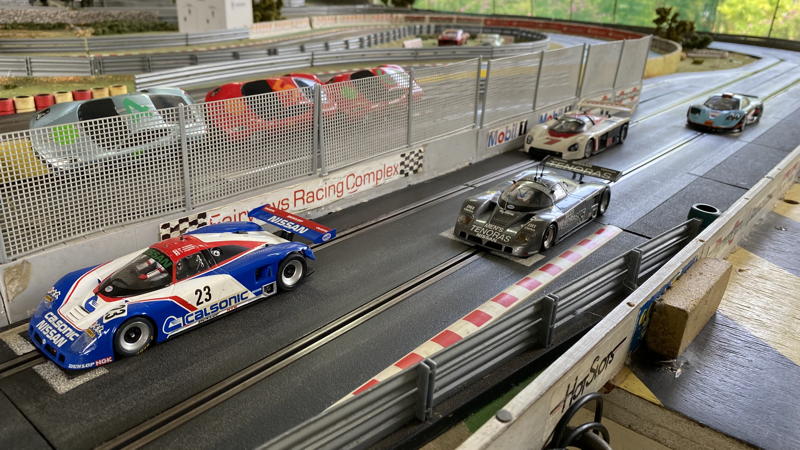 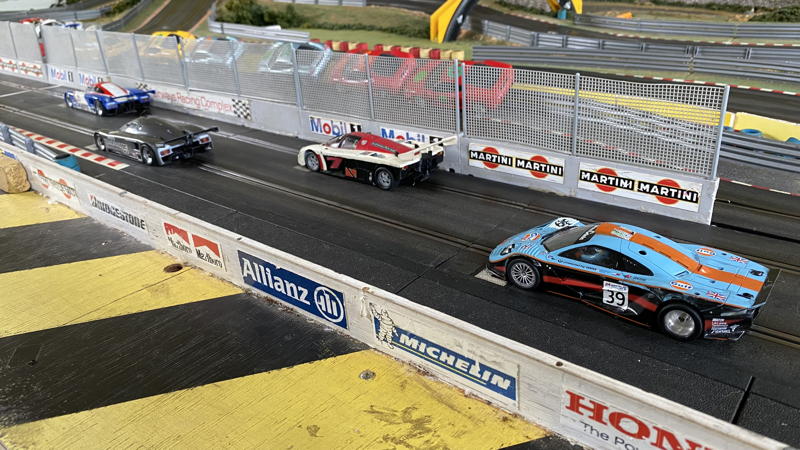 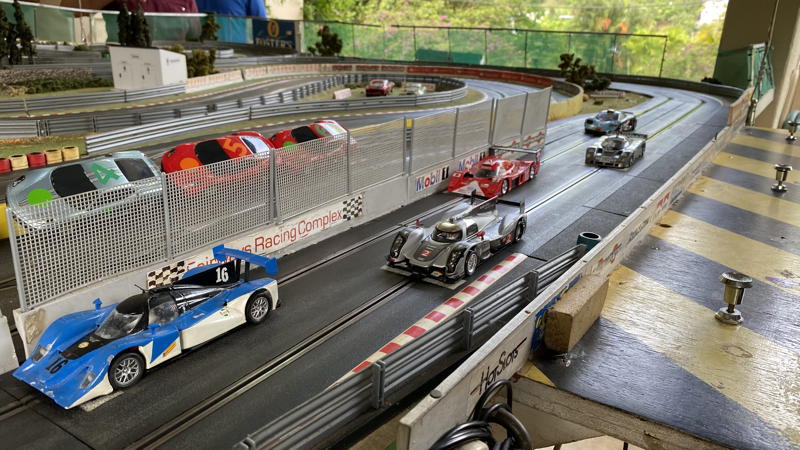 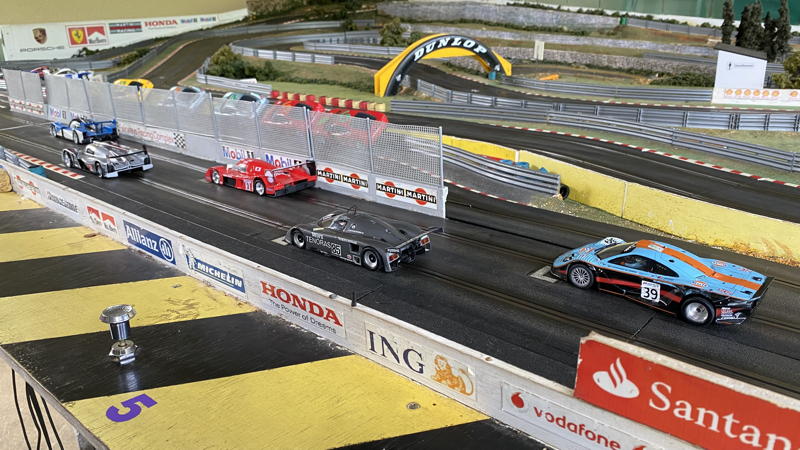 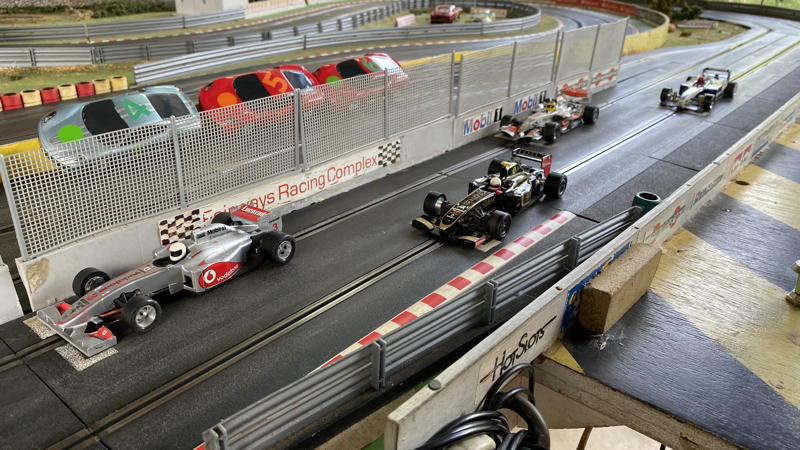 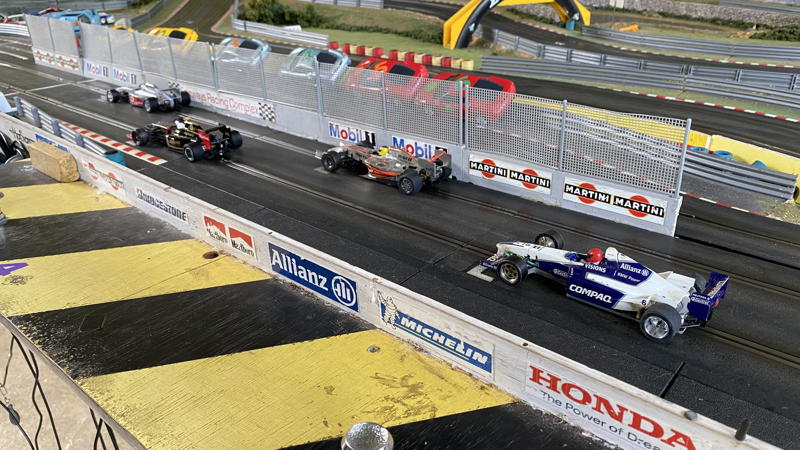 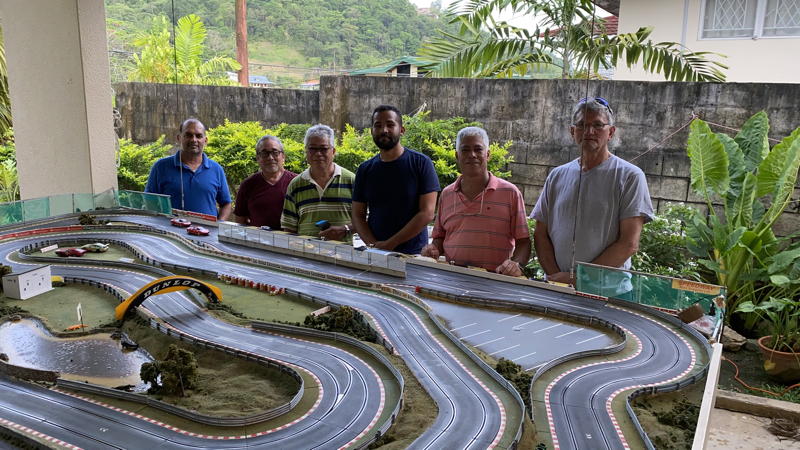 Ferrari Challenge grid with new identifiers on the cars: 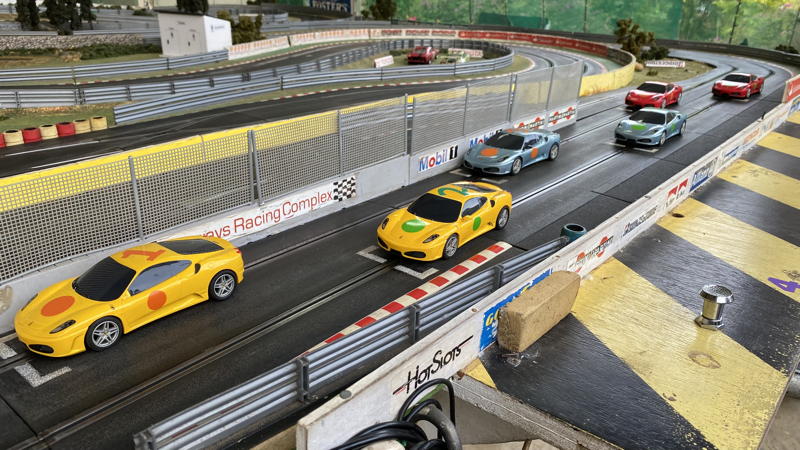 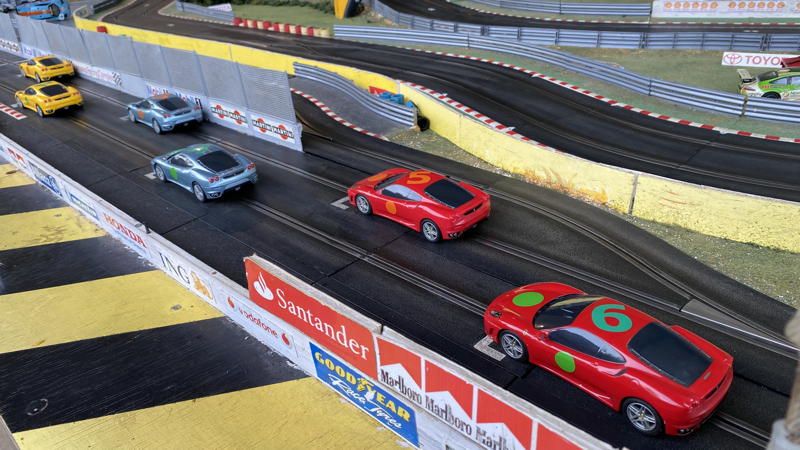 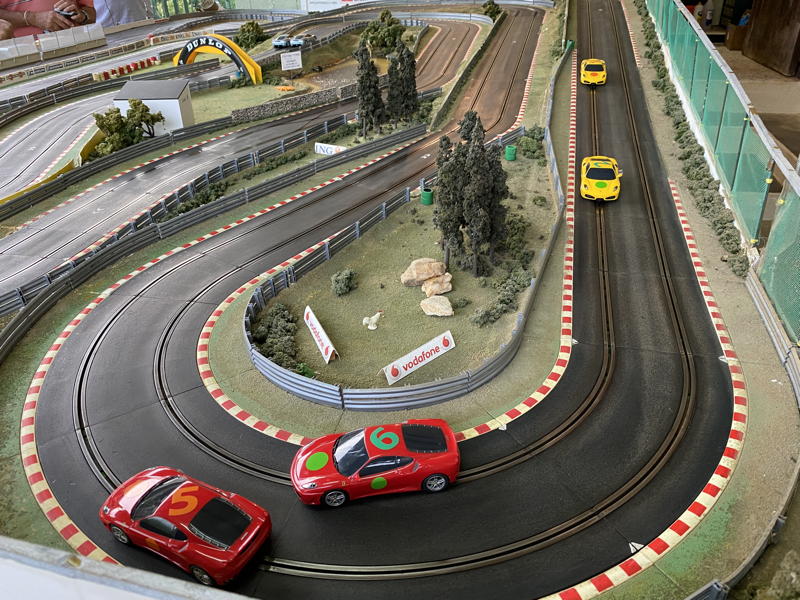 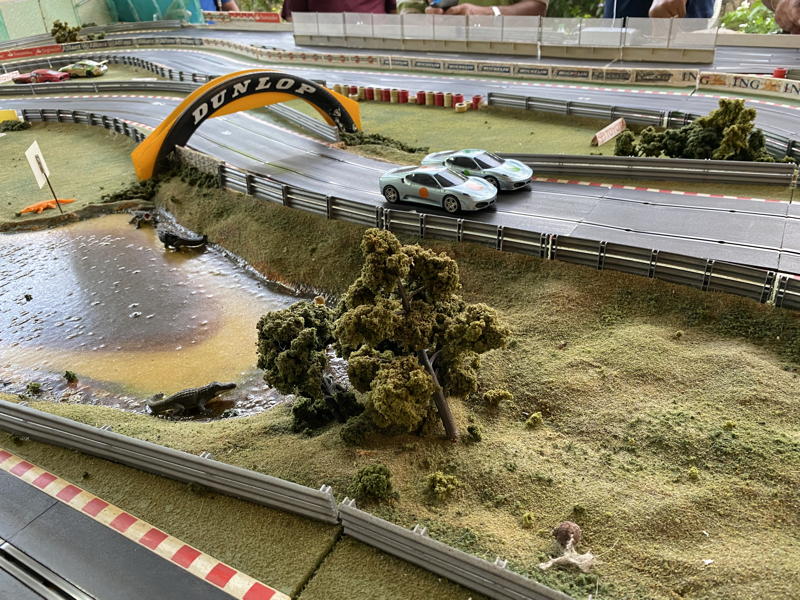 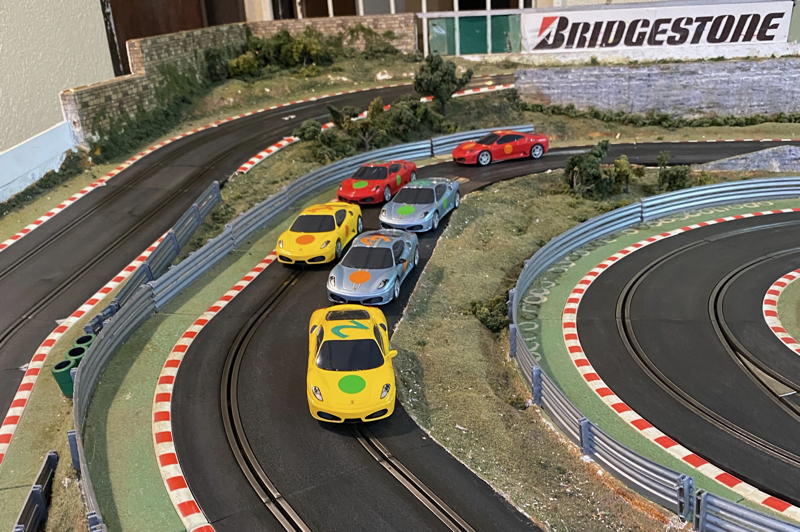 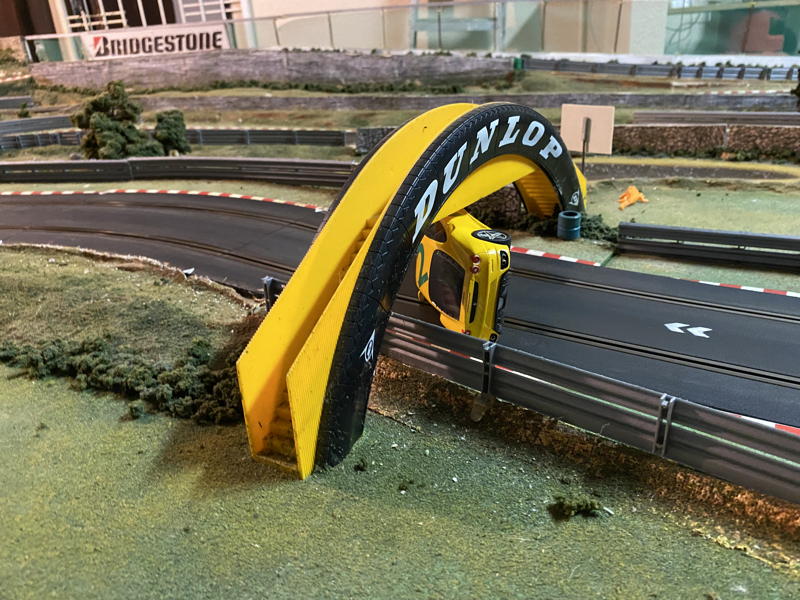 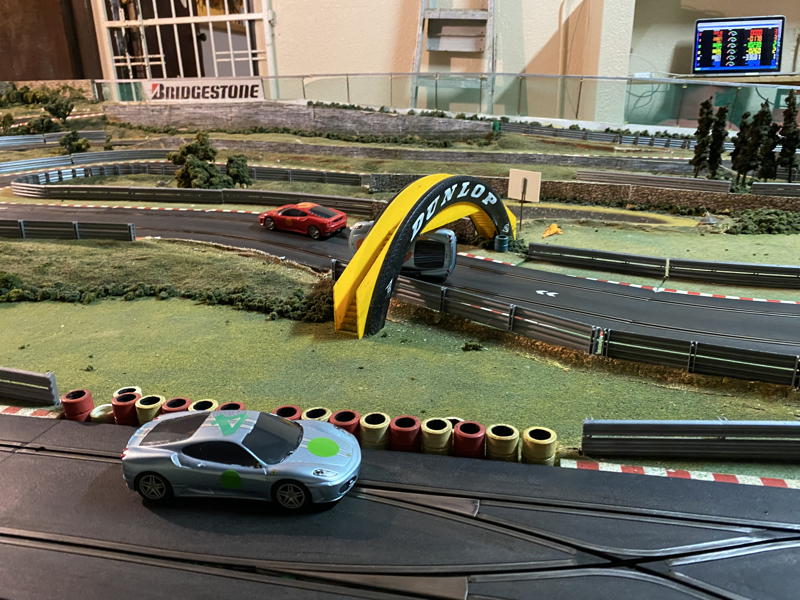 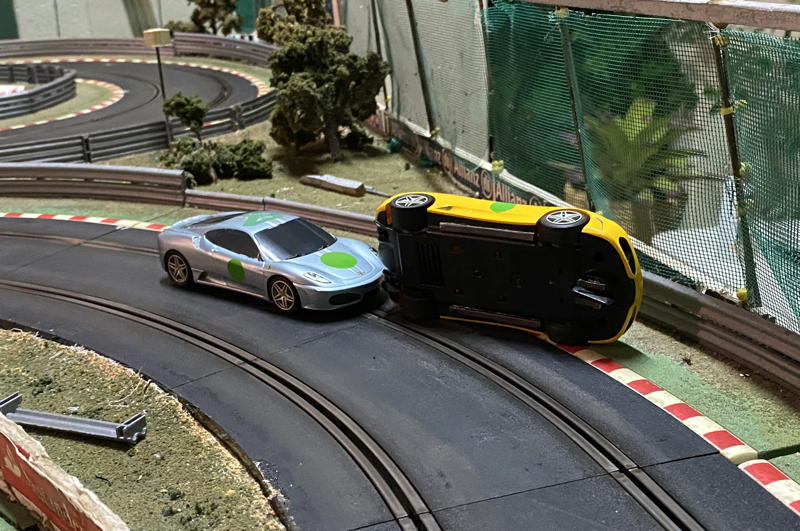 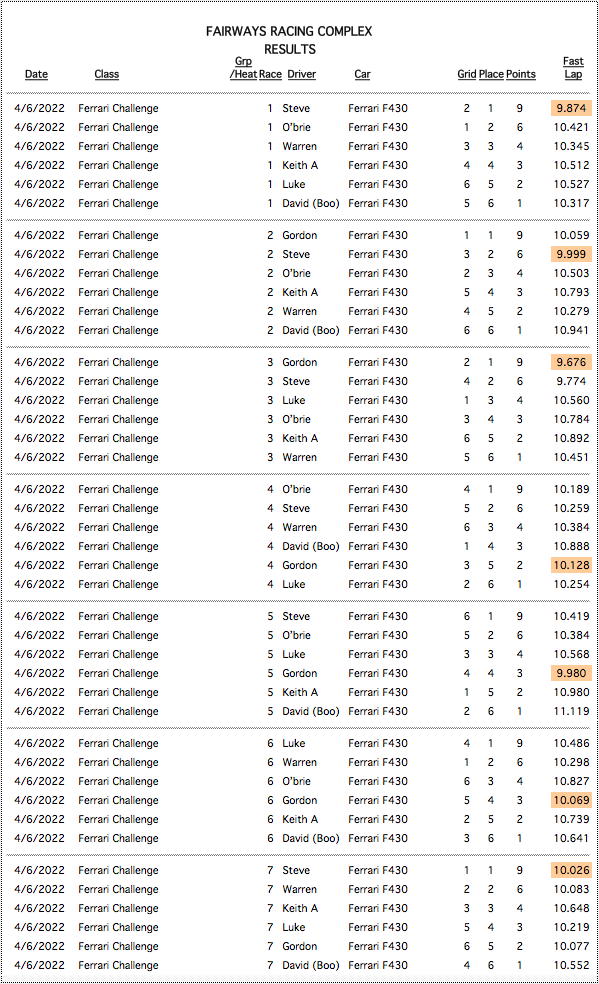 Following is a new IROC report which shows the fastest race laps by grid position. For each car, these are the fastest laps by each driver when they drove the car: 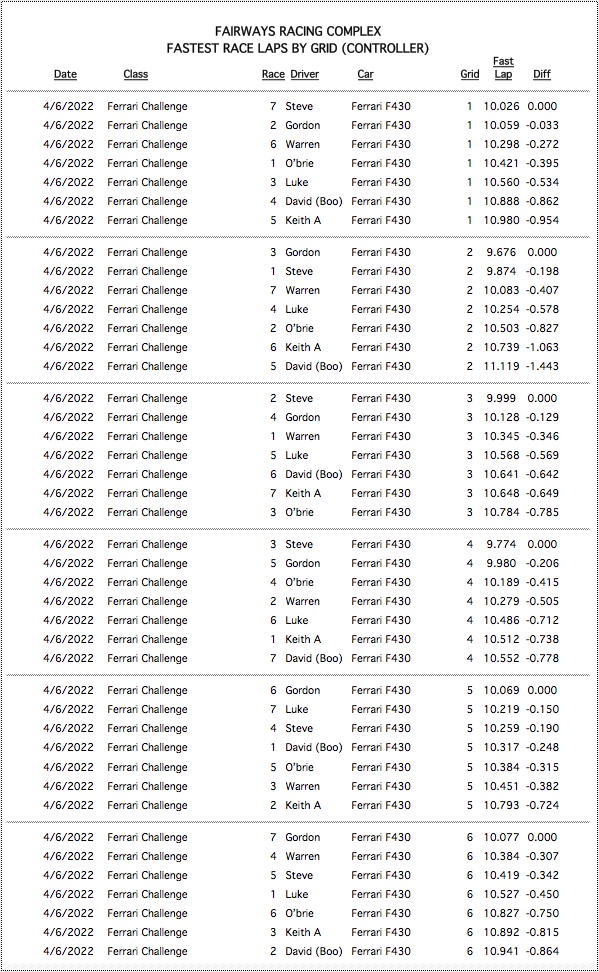 The remaining boys having a beer before leaving: 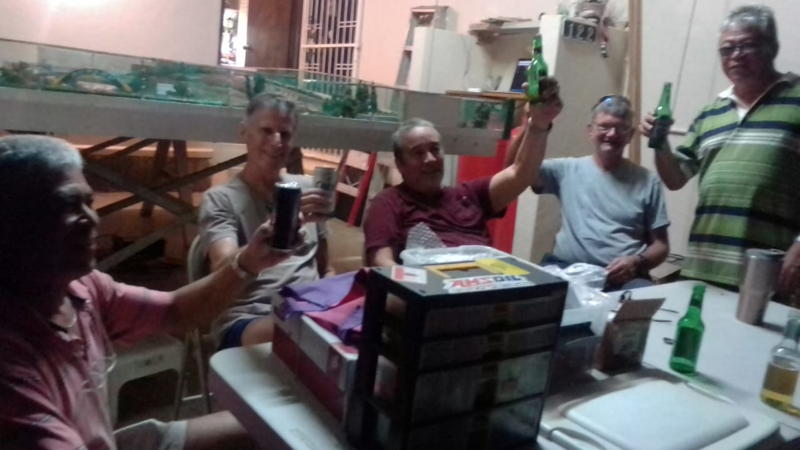 Had a great time yesterday! Thanks to G for hosting the event and to all who made it such fun Boo my ribs still hurt from laughter

great seeing you there

Even though I turned up for racing in the IROC class.

Did reach in time to see the LMP plus F1 classes run-off and all good-looking models (on the grid) racing around the circuit ...

The FC IROC cars (with their new markings) started about 6:00 and finished around 7:30 and this class had all sorts of thrilling and amusing moments.

The comment sound so meaningful it had everyone in stitches - so much so - remembered statement about 9:30 & laughed myself to sleep

Great afternoon/evening as usual at FRC.
Was nice to have Kent drop by and do some laps with the IROC Ferrari F430s and to share some of his successes and challenges with his 3D printing efforts. Great to have Luke D. show up and race his own car, a lovely McLaren F1 in Slot.it Challenge and LMP. A most pleasant surprise was Boo showing up after an absence from FRC action of over four years. His inimitable humour made the event that much more enjoyable.
Racing action was as keen as ever in the non-IROC classes. I was thrilled to take a surprise win in Slot.it Challenge and to get pole position in LMP. F1 continues to be my Achilles heel though. Congrats to O'Brie and Gordon on winning LMP and F1 respectively.
The IROC Ferrari F430s were a blast to race, made even more so by having a fully subscribed grid. Although he didn't win the class, Gordon proved that he is master of these cars by setting fastest lap in four of the six races he drove !
After the racing activity was done, Gordon and I had a little fun doing some fast laps with his Mini and my recently completed Austin A40.
Looking forward to the next event !
Top
Post Reply
4 posts • Page 1 of 1