All things related to racing at FRC
Post Reply
16 posts

We had the largest turnout of drivers since the beginning of COVID at yesterday's FRC event. They included the usual suspects Steve, O'Brie and myself, along with Warren, Luke T and, surprise, surprise, Nicholas, better known at FRC as "Spick". In addition it was great to welcome FRC first-timers Roger and his young son, both of whom took some drives around FRC's challenging turns, adapting well to the track and the Ferrari Challenge IROC cars that they drove.

The first order of business was the FC IROC series of races and it certainly produced lots of action, particularly in their now magless configuration. The number 2 Ferrari had a problem with the chip going wacky from time to time, but that didn't stop the racing from resuming and in proper IROC tradition, everyone drove every car from its allocated starting grid position, making it a completely even contest.

The IROC racing was followed by two GT races which were very closely competed and we finally started packing up around 7:30pm after a memorable and very enjoyable afternoon of slot car racing.

Practice session underway before the racing began. L to R are Warren, Steve, Nicholas and Luke: 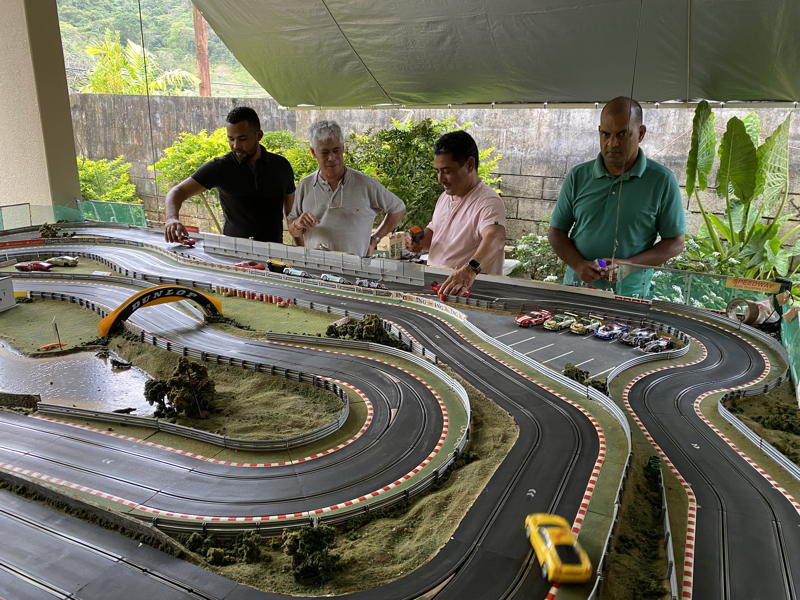 O'Brie gives his best smile while working on one of his cars: 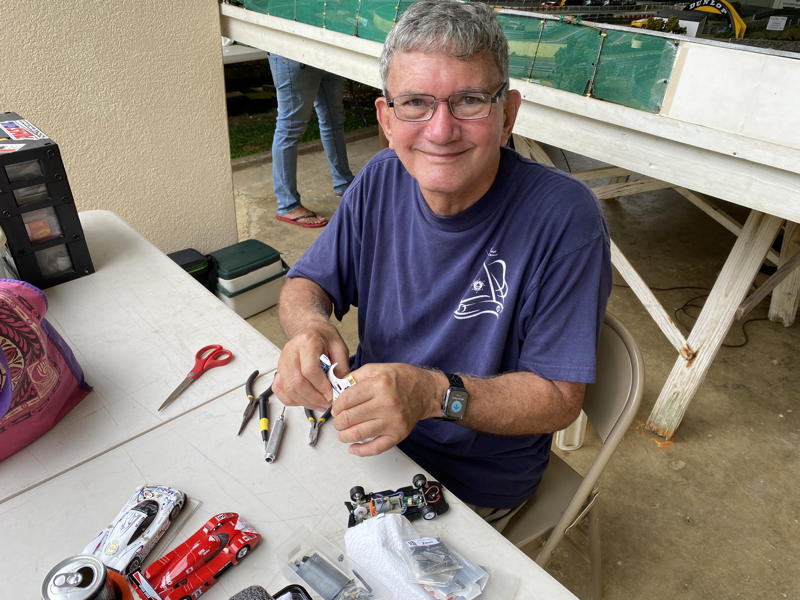 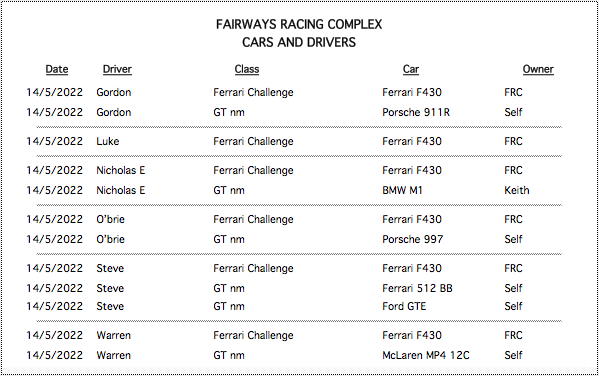 Ferrari Challenge grid - all the cars ready to go!: 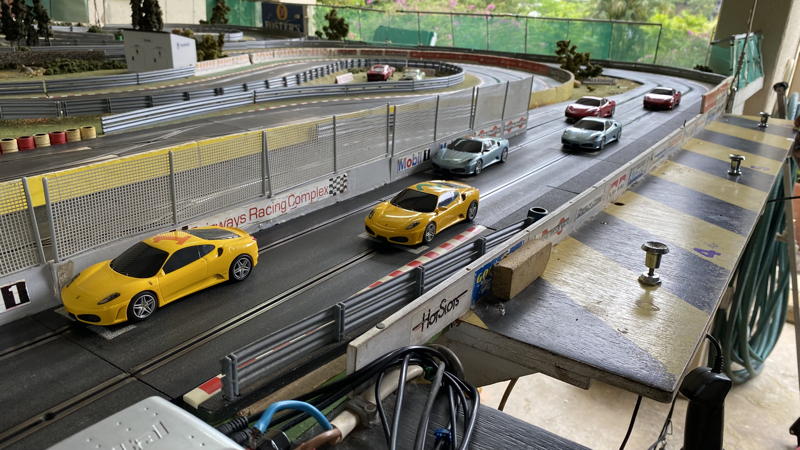 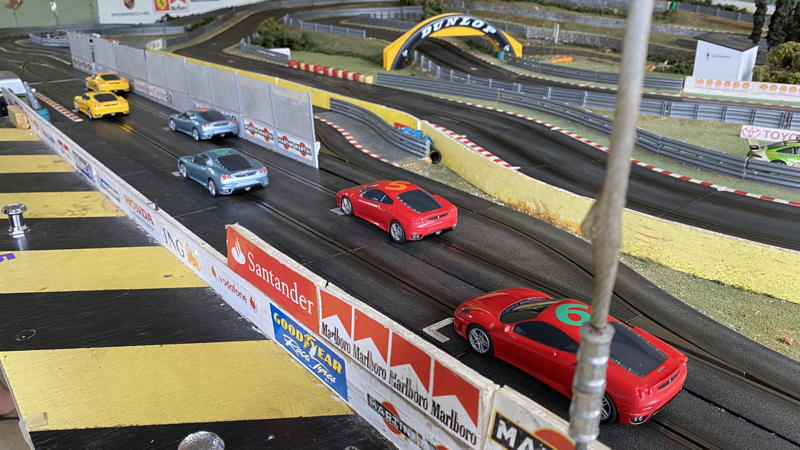 Drivers pose for a pic before racing begins: 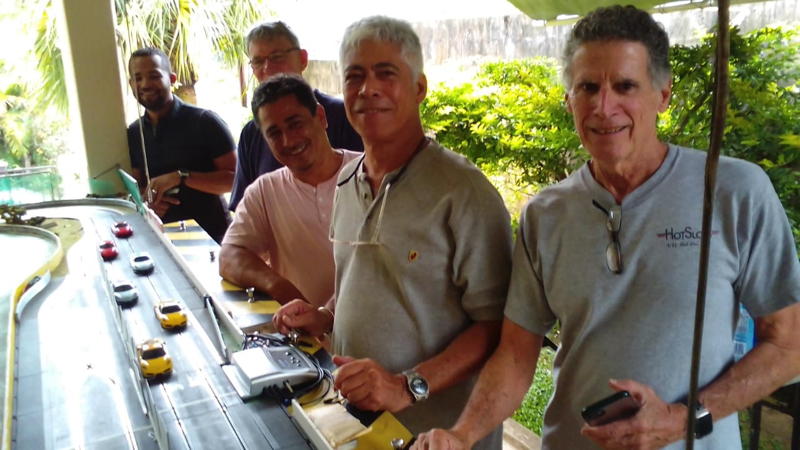 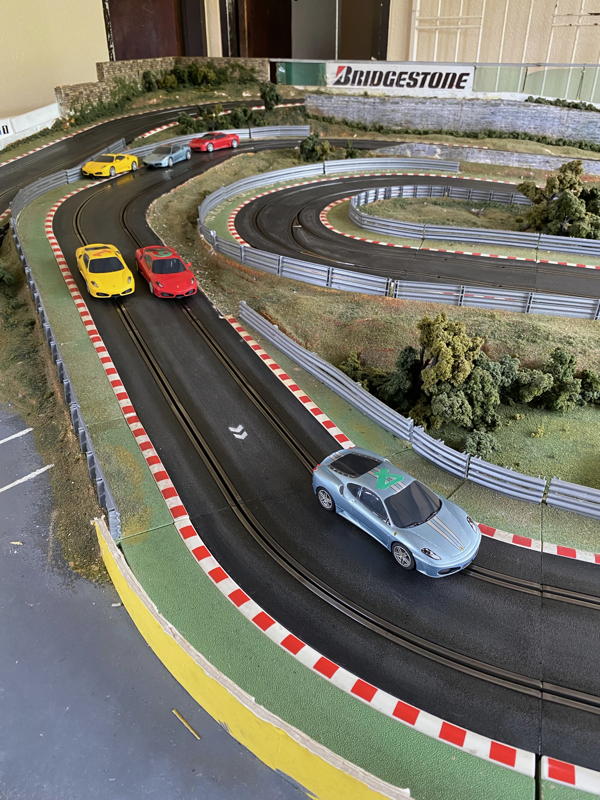 Drivers concentrate during the third race: 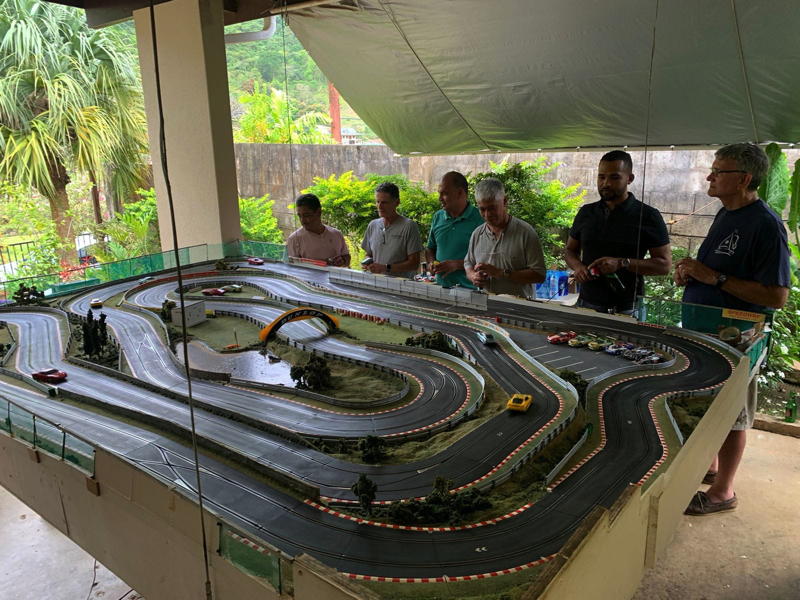 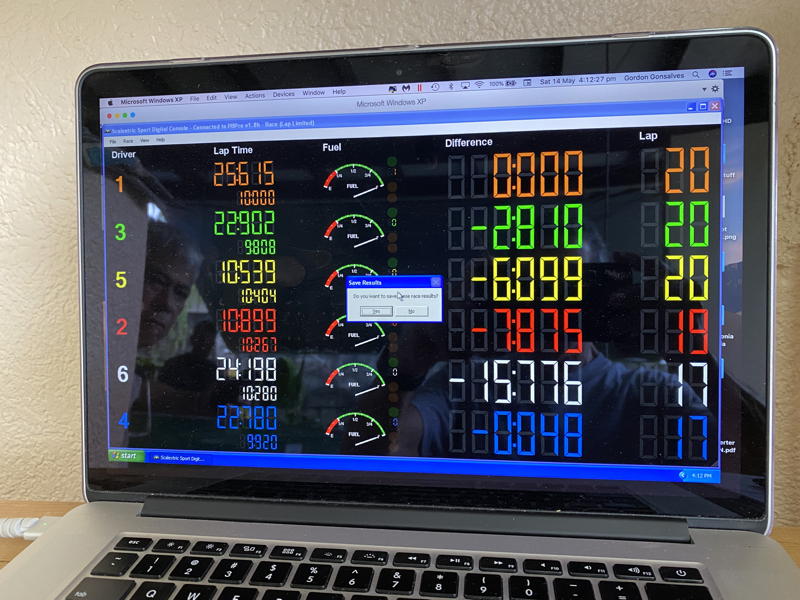 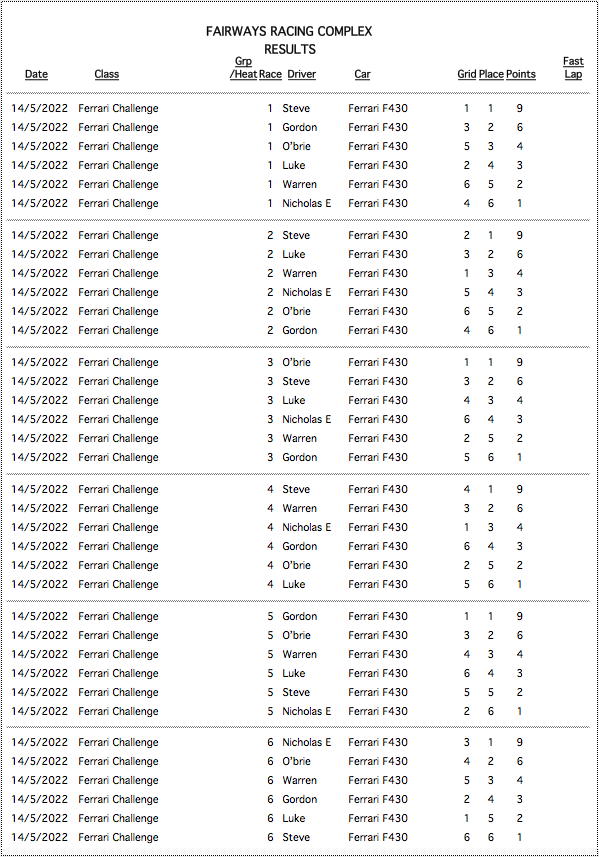 In between the races, Warren, Roger and his son take to the track while I look on: 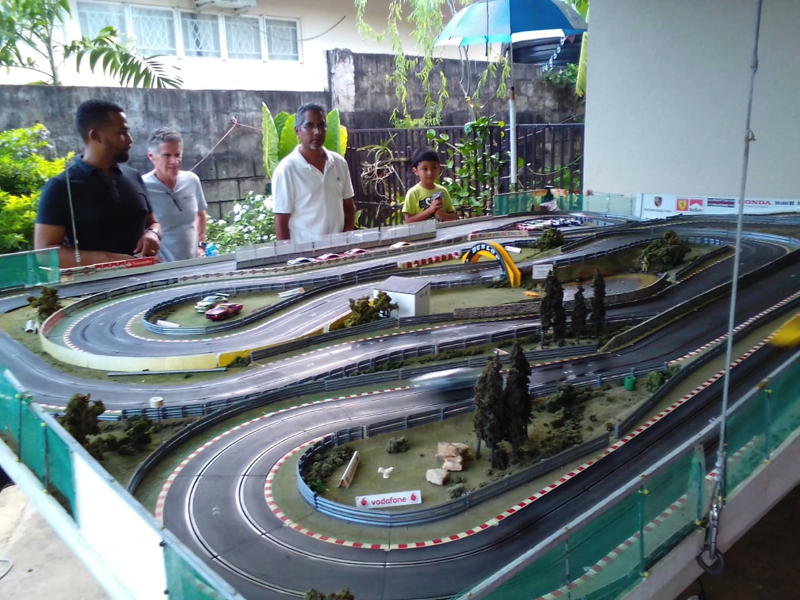 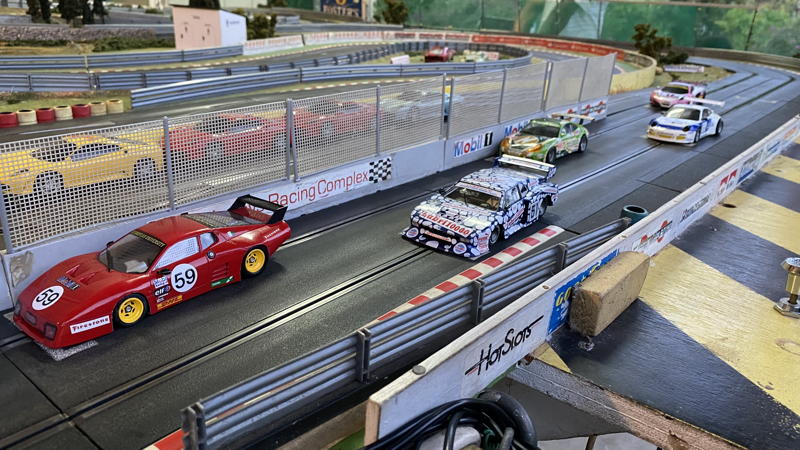 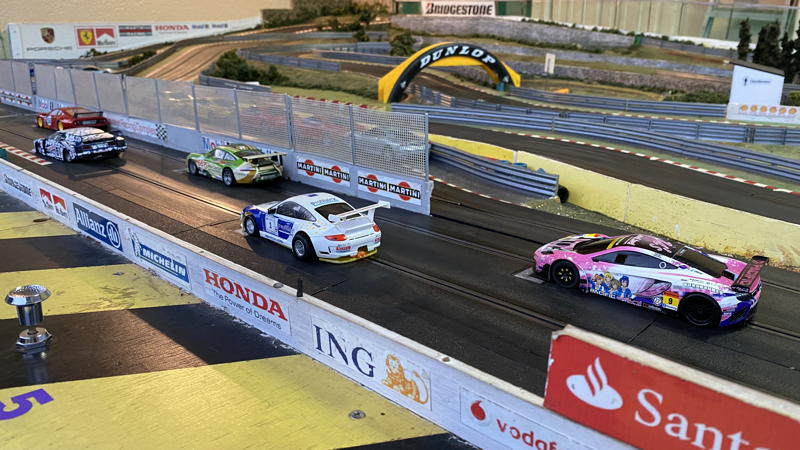 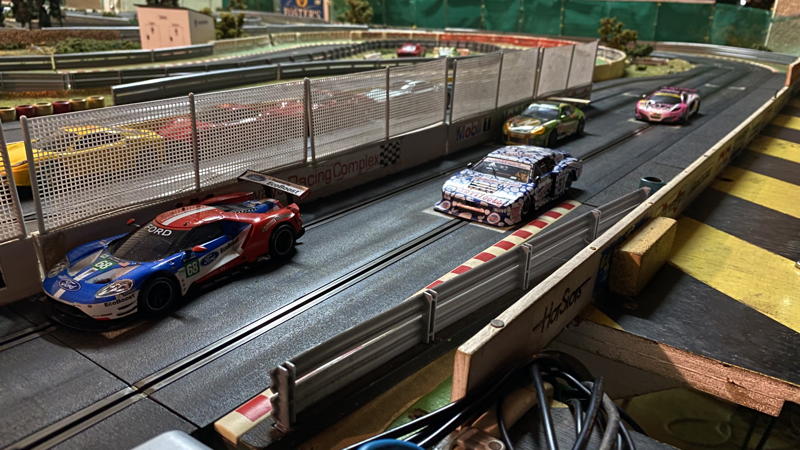 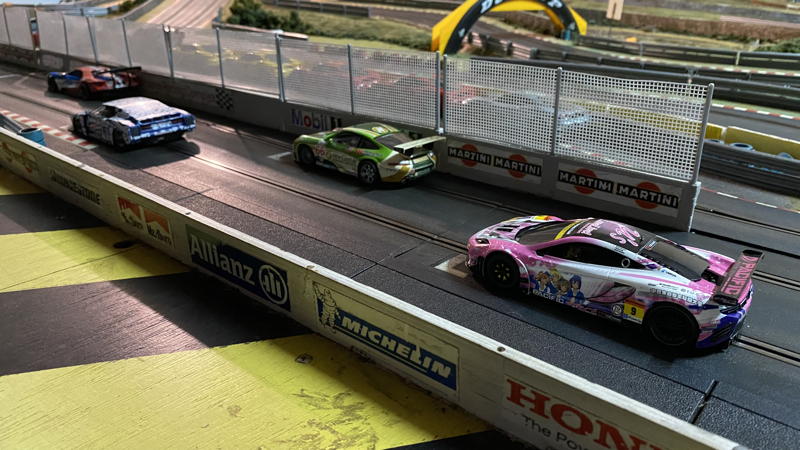 Next event's classes: To be determined.

Great afternoon as usual of racing at FRC. Was nice to see the re-emergence of some 'old' FRC racers (Nick and Luke T), and the appearance of a not so 'old' one (Luke DeNobriga....or Luke D). Great also to see some first time visitors to FRC.
Racing the F430s was a real blast despite the No.2 car having some chip issues. The cars themselves were very evenly matched despite each having its own characteristics.
We had so much fun doing this IROC racing that we didn't get to race some of the other classes, namely Slot.it Challenge, LMP and F1. We did get in two GT races though which were also a hoot. Very pleased with the debut performance of my Ferrari 512 BB. As much of a Ferrari fan as I am, I have never before this car , owned a Ferrari for racing at FRC...and it's RED. !! Also pleased with the performance of the Ford GTE which did a qualifying time in the second race which, quite honestly, surprised me. Nick showed that his driving ability is still there , getting Keith's BMW M1 qualified in second place for both GT races, despite being away from FRC for a number of years. Very good performances also put in by the Porsche 911s of Gordon and O'Brie (997 variant for O'Brie) and a truly fantastic performance by Luke D's McLaren which arrived at FRC without even a digital chip and was able to be made quite competitive in short order.
Looking forward to the next event.
Steve
Top

IROC was great and we all had fun even with the #2 car seeming to have a bad chip! We definitely need to do that again. Glad to see some old familiar faces mixed in with some new

O’Brie, congrats on your performance! Only the new Ramesh beat you!
Top

I wrote ... Dramatic ... because during the races we all (at different times) had episodes - while racing - watching the wrong numbered car

Luke, the immediate solution which comes to mind is to put a strip of coloured (fluorescent?) tape along the doors on each side of three cars (and possibly on the bonnets), one of each car colour. So we can do this either on cars 1, 3 and 5 or on cars 2, 4 and 6. That will easily differentiate the two yellow, blue and red cars.
Top

Your idea sounds good Gordon ... and putting ideas together

Whichever way is considered ... consider it done ... yours truly getting these Coloured Roundels Stickers

Whichever way is considered ... consider it done ... yours truly getting these Coloured Roundels Stickers

Luke, I think that us short fellas need something on the sides (doors) of the cars to quickly identify them at a distance. Sometimes the angle and glare on the top surfaces (bonnet, roof and back glass) make it difficult to quickly and easily identify the car. I have yellow, red and black electrical tape if we need it (eg. we can use yellow on the doors of the red and blue cars and red on the doors of the yellow cars). But the roundels can also work, once they're on the doors. Just some thoughts.
Top