A group of nine drivers converged on FRC to compete in the latest round of rally stages and BTCC and Slot.It Challenge races. It was great to have Alex back on the track for the first time in a long while, where he showed that he can still motor around very well in a slot car.

The rally stages were very close as usual, Luke B showing the way with his Peugeot 406, closely followed by his immediate competition. In BTCC the bigger VW and MG cars proved dominant, setting the fastest times and running at the front much of the time. Slot.It Challenge had some good action right through the field, with Warren's having a very impressive debut in the class driving Steve's Toyota 88C.

Once again it was an enjoyable night of slots at FRC with lots of friendly rivalry featuring boys and their favourite toys. 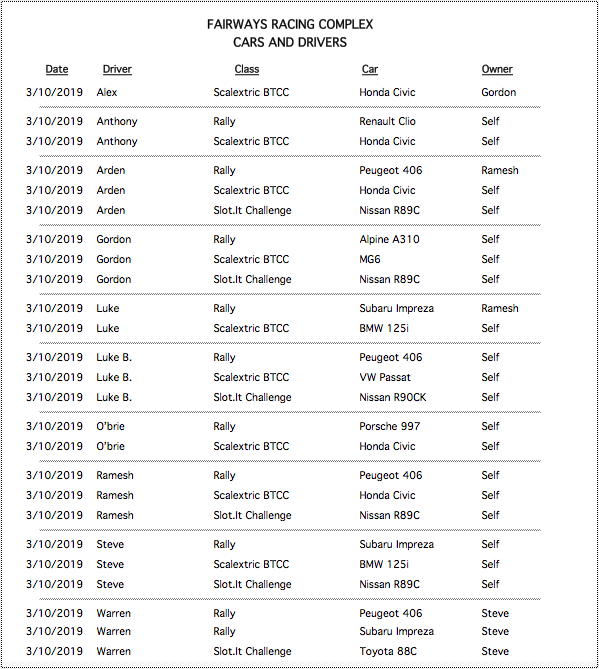 Three interesting pictures of Steve's Porsche crashed under the Dunlop bridge during practice. You couldn't have placed it more accurately! 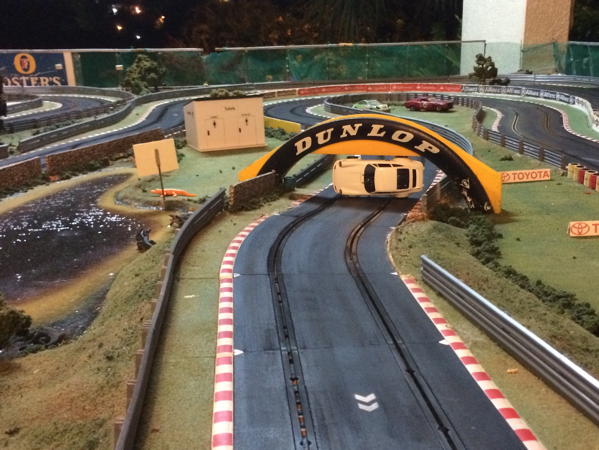 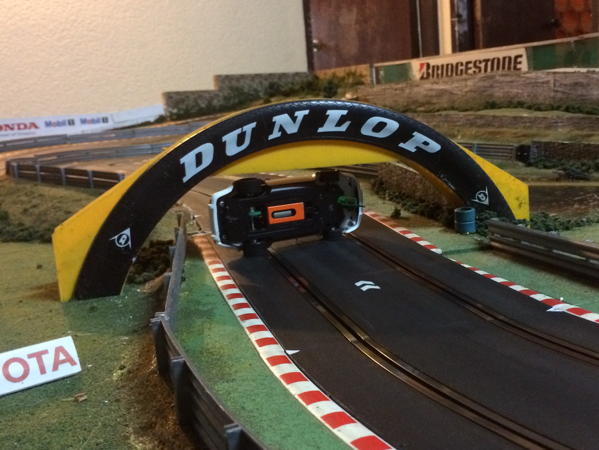 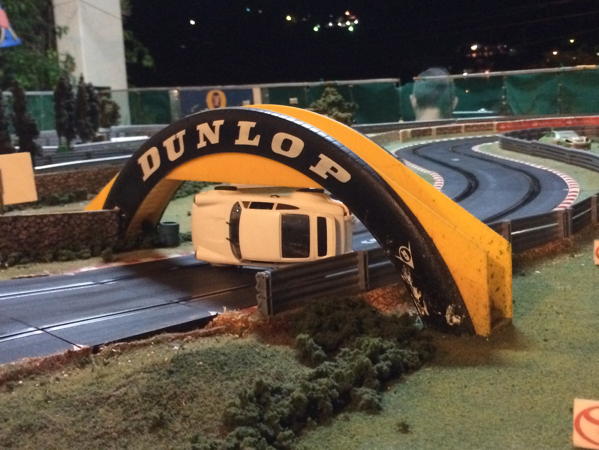 In another practice incident, O'Brie's BTCC Civic is seen exploring the greenery at the top of the hill: 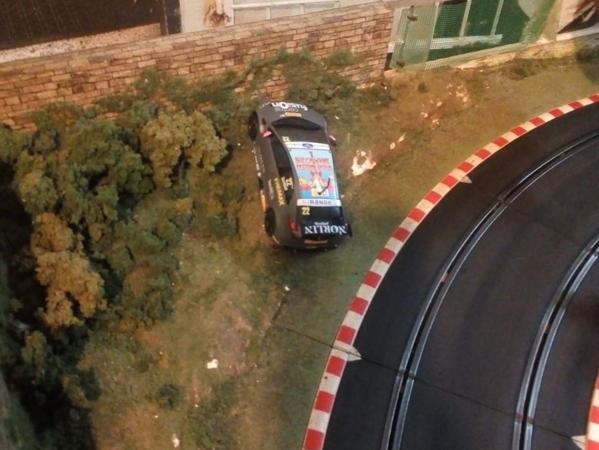 Ramesh and I doing tech inspection before the on-track competition began: 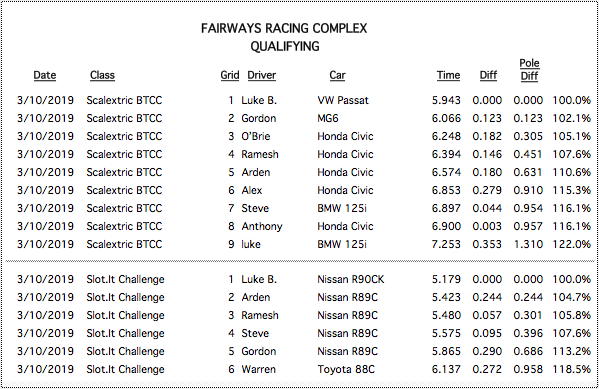 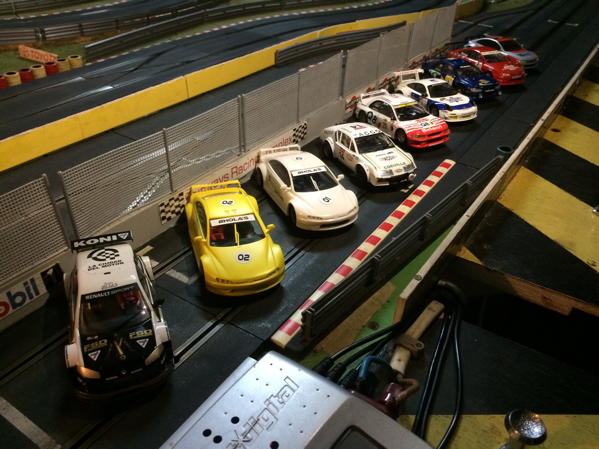 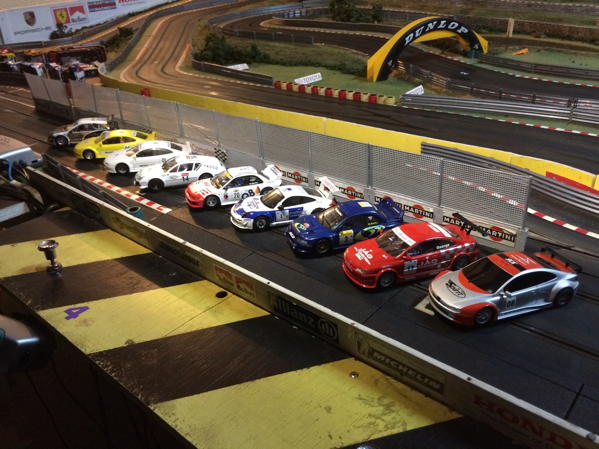 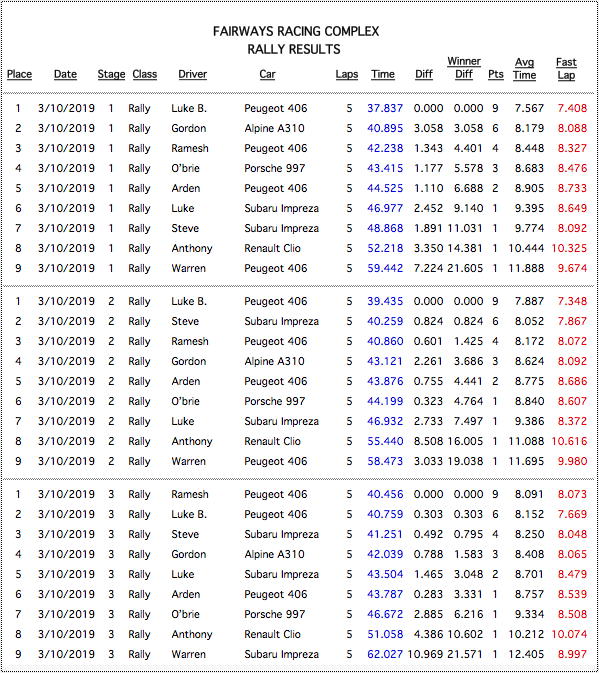 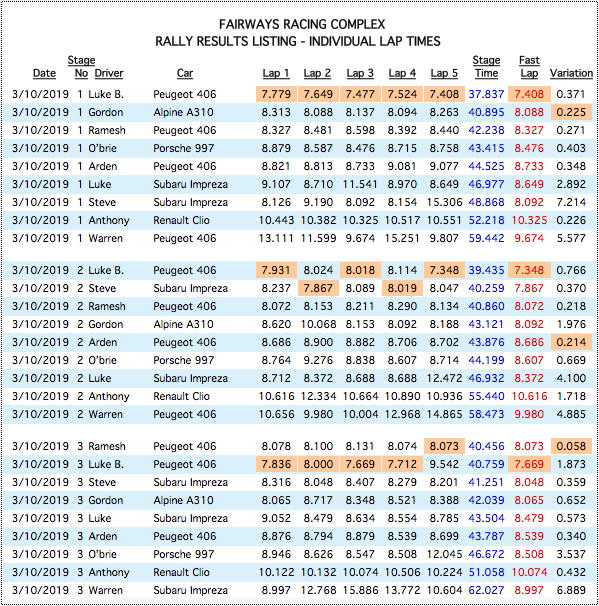 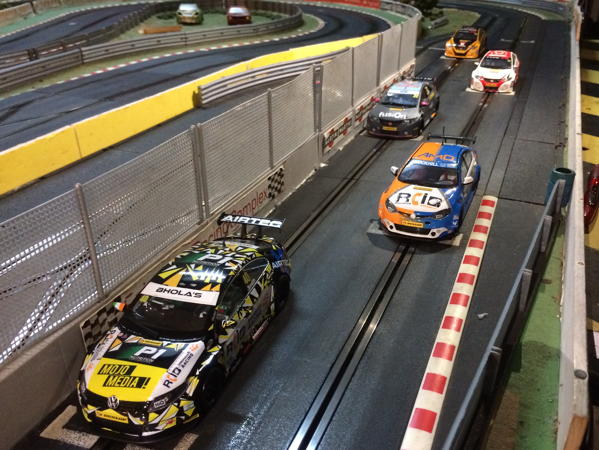 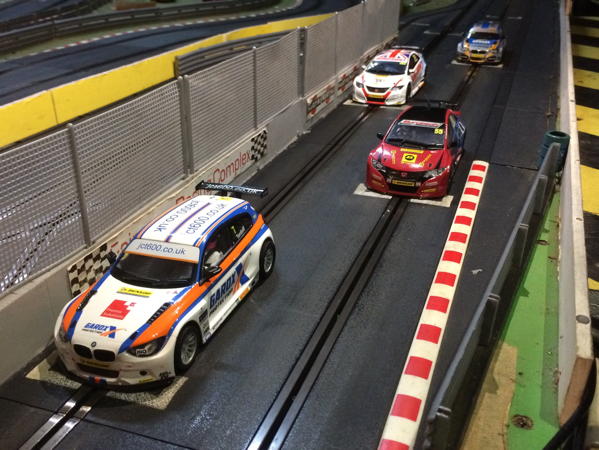 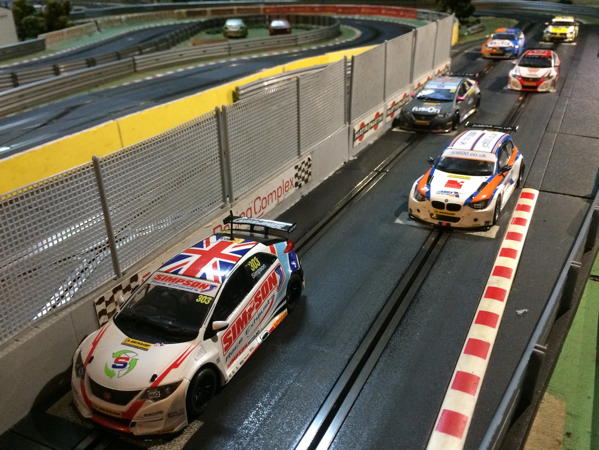 Luke B's Passat exits the Caiman Pond hairpin, closely followed by my MG6 in race one: 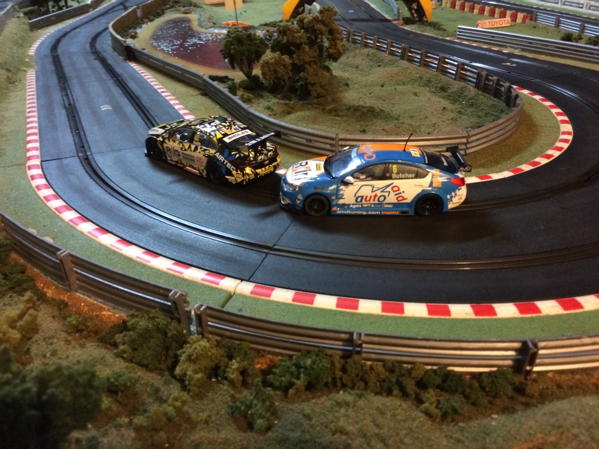 BTCC final with five of the six cars visible. Alex's and O'Brie's Civics are in a dead heat, followed by Ramesh's Civic and Luke B's Passat. My MG6 rounds Fosters in the background: 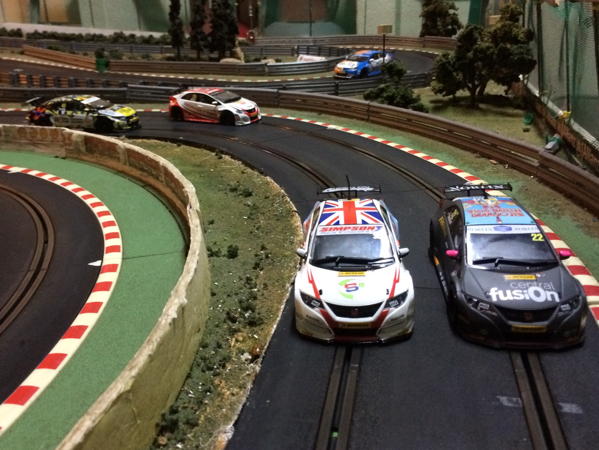 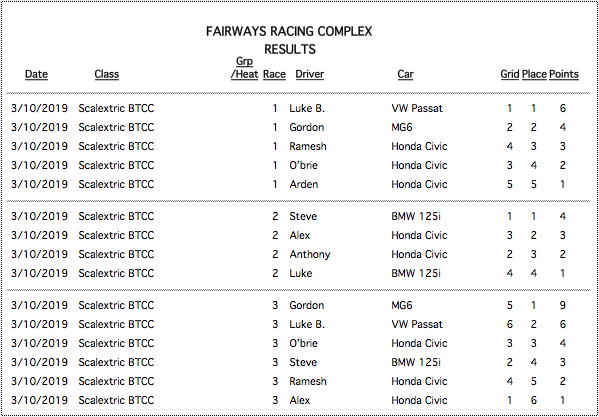 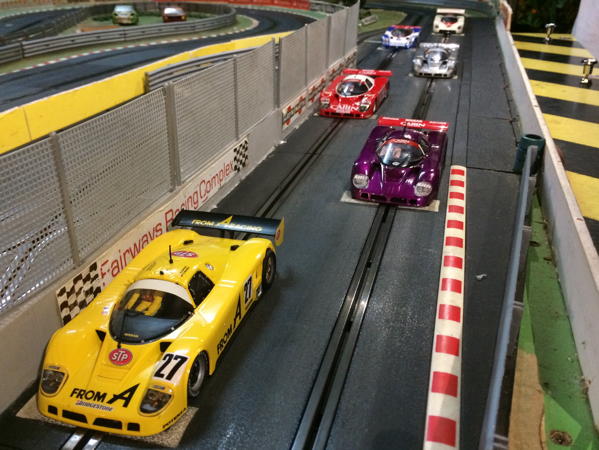 Five of the six cars are visible in this pic as my R89C spins rounding the carousel: 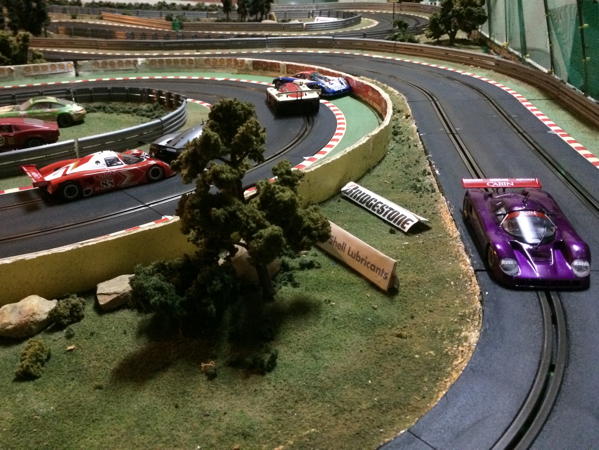 My R89C and Warren's 88C tangle going up the hill: 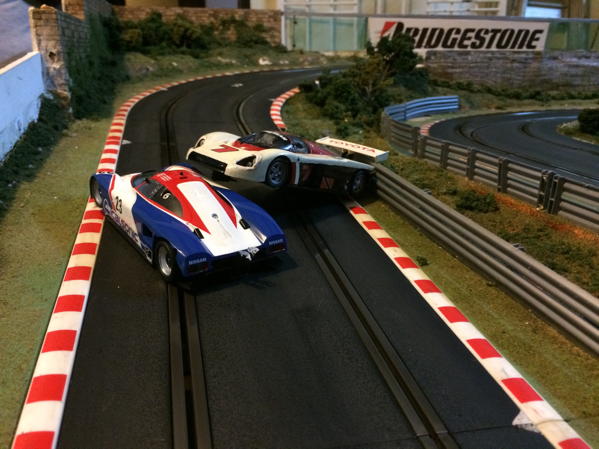 Luke's R90CK on the infield alongside my 88C. In the background are Steve's and Ramesh'e 89Cs: 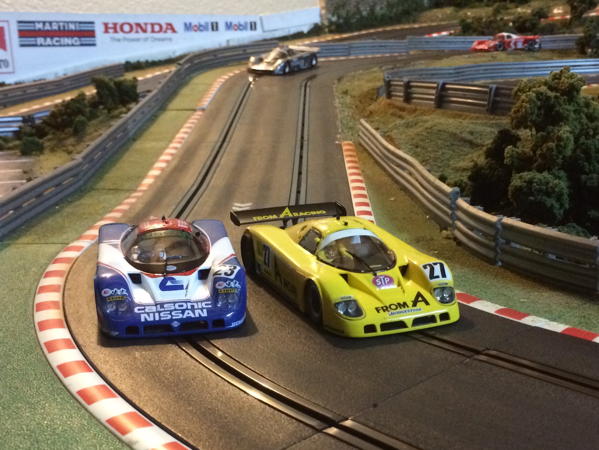 Warren's 88C has an off in the hairpin, with a queue of cars behind him: 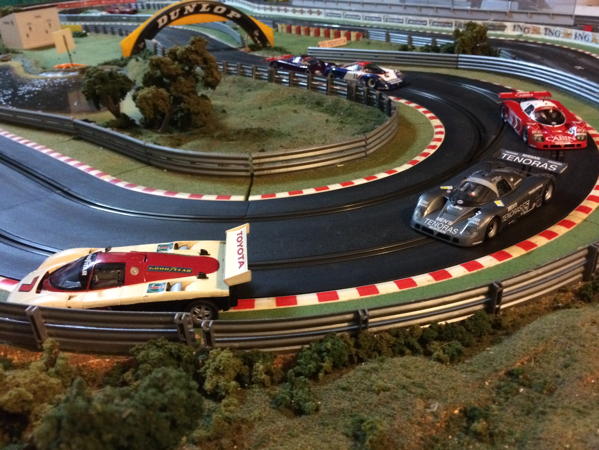 Another angle of the incident:

the BTCC class is a great mass of competition and this is one time that I wish we had Oxygen so that we could all race together!!! A minor tweak with the VW’s and MG’s and we will have a class that might warrant a night dedicated to that class alone with several races run. Food for thought?

Great night of racing as usual at FRC.
It was great fun from the outset, with the action starting from practice before racing, as can be seen from the photo of my 911 under the bridge. The good driver turnout was nice to see, especially so with the return of old hand Alex who hopefully will be a more regular attendee and hopefully racer in the future. The BTCC cars amazed with their speed, the fastest car qualifying with a sub-six second lap time ! I did some minor tweaks to my BMW 125 after its last outing, hoping it would be up with the top guys now but I think it still needs to grow a few mm. in wheelbase before it is competitive. With the newly implemented ground clearance regulations, it was expected that the Rally and Slot.it Challenge cars would have slower lap times than previously and, with one or two exceptions, this was the case. My Subaru Impreza performed very well but an unfortunate 'off' in the first stage had put me out of real contention in the class although individual lap times were pretty good. After the racing action, Luke D. and myself had some fun running his standard BMW Z4 (with magnet) against my Scaleauto Z4 (no magnet). In this configuration, the cars were pretty closely matched on track.
Congrats to Gordon on winning the BTCC class and to Luke B. on winning everything else. The only negative for the night was that O'Brie wasn't able to bring any tamarind balls.
Looking forward to the next event.
Top

Start of the BTCC race and especially with the (correction ... not 2 VW Passat but) VW Passat & MG6 models pictured ..!

It’s a perfect photo, that explains the overall excitement between racing competitors Gordon & Luke B. for a victory.

My notes at this 279 FRC event

Yes Luke, it was close racing between Luke B and myself during those races. Very intense from a driver's point of view. One correction - Luke's car is a VW Passat and mine is an MG6.
Top

Hi guys great night of racing i know we can only get faster as we have gotten in the groove , O Brie and i had some close racing and i know Arden is going to get his car faster so the battle of the civics will be a good one. Nice pics to recap the event and superb reporting, see you all at the next event .
Top